Toronto FC vs. Tottenham Hotspur and the Reality of Mid-Season Friendlies 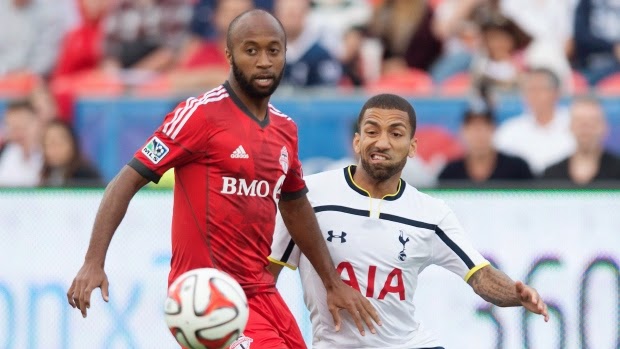 For the first time in seven years I attended a midseason friendly last night.
As the visiting Tottenham Hotspur casually knocked the ball around in the first half at BMO, and Toronto FC’s starters tried their best not to pick up any injuries, I remembered why I hadn’t been to one of these matches since Aston Villa paid TFC a visit in 2007.

These mid-season friendlies, hated by the major supporters groups in Toronto and by some of the other groups around the league, seem to be a necessary part of doing business in the MLS. As I looked around the packed stadium last night, and saw the lineups for beer and concessions, I couldn’t help but think of all the money these matches generate.

Besides the filthy lucre what’s in it for the clubs involved?

For a side like Tottenham, who are starting into their pre-season, it’s a fairly decent competitive fixture where they can try out new formations, allow their starters to shake off the summer rust and also give their fringe players a chance to impress.

However for an MLS side like Toronto FC there doesn’t appear to be a lot of upside, particularly for their starters. Coming in the middle of the MLS season, often in the midst of a packed schedule, these additional matches add more miles onto the player’s legs and they carry the threat of injury. In fact, that Villa match I attended back in 2007 saw TFC’s lone creative midfielder Ronnie O’Brien re-injure his knee and subsequently miss the rest of the season. Last season Toronto FC’s former President Kevin Payne when pressed on the issue of supporters groups being against this mid-season friendlies by commentator Jason De Vos, snapped that TFC fans should “Get used to it.”

It was a crass response to a very touchy subject and lost him the few fans he had left among the dedicated fan base. The truth of the matter is though, that he was right. Fans of MLS clubs do have to get used to these matches. Besides being a big money spinner for North American clubs, more and more commercial partnerships between MLS and EPL sides virtually guarantee that these fixtures will continue.

Personally I am not a fan of these matches and haven’t paid to go to one since the first season of TFC’s existence, when everything was fun and rosy in the BMO Field. But as the reality of these matches sunk in for me and others, I opted to give them a miss. However with free tickets in hand, I made way to the match last night with my dad and a friend.

As Toronto FC’s starters took it easy last night in a dreadful first half, Tottenham’s Argentine midfielder Erik Lamela score two fine goals to stake the Premier League side to a 2-0 lead. It was a disappointment for Jermain Defoe as the former Spurs man was starved of service against his former side.

After the break Defore came off and the rest of the whole scale substitutions that normally mark these matches occurred. 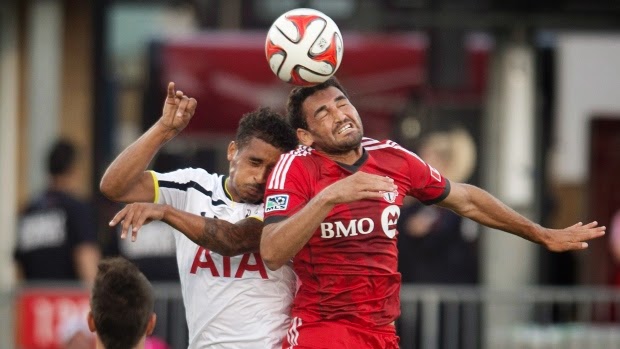 But then something wonderful happened. TFC’s youngsters and underused reserves started to play like they cared and in the 65th minute Andrew Wiedeman got the Canadian side on the board.

TFC continued to press and there was joy for teenager Jordan Hamilton when he equalized in the 73rd minute. The young Scarborough native, who has only made one senior appearance for Toronto FC, found the net with a crisp left foot finish after some good work by Wiedeman in the buildup.

Although Spurs went on to win the match 3-2, with a late goal from Andros Townsend, I walked away from the match reflecting on the experience the younger and lessor used Toronto FC players would have had from it. They got to grace the pitch against Premier League stars that they would typically only see on TV, and a local 18 year old kid in Hamilton can always say now that he scored against an EPL side.

If we are to put aside cynicism for a moment, these matches can at the very least be of benefit to our younger players. They’re a hassle for the starters, sure, but players who haven’t seen a lot of time on the pitch in the MLS can at least take to the field against quality opposition and show the manager what they can do. If these matches are going to continue, and they surely will, at least this is something we can take from them.
SHARE SHARE SHARE