On this week’s edition of Throwback Thursday I will be looking back at my first experience of watching a live football match. I will take some time to talk about the game itself but also my personal experience and what it meant to me.

I hope reading this will spark similar thoughts in you and bring back great memories from your past and possibly your youth. If you would like to share them with us, use the comment section below, I would love to hear your first game experiences.

My first live football game experience came in March 29th 1994. It was the first leg of the Cup Winners Cup and SL Benfica was hosting Parma in the old Estadio da Luz. I was 16 years old and I had never been to a football match so to go see my favorite team play at home in a semi-final of a European competition was not only a treat but a dream come true.

I grew up in Nazare, a small tourist town north of Lisbon but on the coast line of Portugal. My parents couldn’t go with me so I took the supporters bus from my town to Lisbon. The travel itself was an experience on its own. I went with 3 friends of mine who had been to several games before; I was the rookie of the group. The singing and drinking on the bus was something I hadn’t experienced before and it was a real life experience, being the youngest of the group.

Once we got to the stadium we immediately hit the food trailers. Let me tell you, there is no better food that the one being sold outside the stadium on game day from the local vendors. In the old stadium they had all these trailers’ and tents setup up for people to go and drink and eat before heading inside for the game. The food and drinks were very affordable and it was another chance to mingle with fellow supporters and eat some good food after a long drive to the game. I remember eating like a lord, because once I got inside I wanted to concentrate on the match and not spend time eating or doing anything else that would take away from my experience. 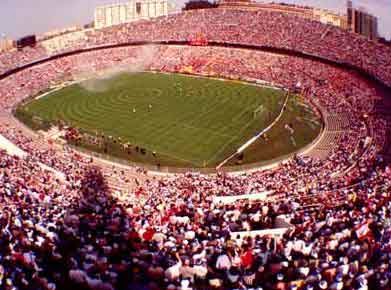 At that time the tickets were general admission, so you went in and could pretty much sit anywhere you wanted. There were no seats only concrete stands. People would take food inside in small coolers and even beer was brought in. You could almost have a picnic inside the stadium, imagine trying that now? We set ourselves on the north side by the corner flag, probably not the best place to watch a game, but it was very close to the fences and at least during the corners you could see your idols up close.

When the PA announced the teams, my heart almost stopped. Benfica had in the lineup Rui Costa, Mozer, Abel Xavier, Joao Pinto, Isaias and Veloso just to name some of the most recognizable ones, but Parma was a team full of stars as well, they had Sensini, Tomas Brolin, Zola, Asprilla & Benarrivo to also only name a few. That was one of the best Parma teams I have ever seen. At that time Brolin, Asprilla and Zola were three huge superstars. Rui Costa would become one, but at that time he was a young player still earning his way to the top.

The stress of playing a semifinal in a stadium that had around 80,000 in attendance was noticeable, and as a fan my heart was racing. I am not sure if I was nervous about the outcome of such important game or if the emotions of being there was just too much for me.

The game started in the best way possible; at the 8th minute mark Isaias scores the first goal to give Benfica the 1-0 lead in the game. The stadium went wild, and I almost fell down the steps. I couldn’t believe that I was there and they were beating this incredible Parma team. It was like a dream had come true. The happiness that I felt and that was shared by near 80,000 didn’t last long, six minutes later Zola scores and the game is tied at 1. I think the air came out of my lungs; it was like a stab in the back. A tie at home in a 2 leg affair is not good, but like everyone around me kept reminding me, it was only the 14th minute mark, so there was still a lot of game to be played.

It took Benfica until the 60th minute to regain the lead on a goal by Rui Costa that had already assisted on the first one. He was in my mind at that time the man of the match, and really became my favorite player of all time. Incredible how one game, one performance can leave those marks in one person. That day he became my idol.

When Benfica was already leading 2-1, Yuran was taken down in the box and Benfica was awarded a penalty. Vitor Paneira was the man given the task to score from the penalty spot. I remember like if it was today, turning to my friends and saying that if we score we will be in the final, but if we don’t we will go down to Italy with only 1 goal lead and we will end up losing in the last 10 minutes. Somehow I wish I hadn’t said that, it was almost like a curse, not of Bela Guttmann proportions but close. Paneira’s penalty kick was saved, and Benfica would finish the game with a 2-1 lead which eventually wasn’t enough since they lost in Italy 1-0 with a goal scored in the 75th minute.

In the end Benfica had won the match and Rui Costa had shown that he belonged among Europe’s best players. As a fan I couldn’t be happier, my first game ever was an European semi-final and my team had won. The memories of that match live with me for as long as I live and will never be replaced with anything else. It doesn’t matter how many games I attend in the future or have attended since, no game will ever match that game on March 29 1994.