The Loyal - 15 Footballers That Only Played For 1 Club 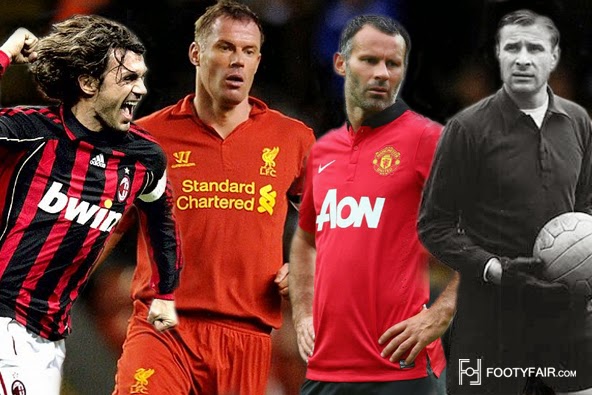 Stars must align in order for a footballer to spend their entire careers with just one club. Now more than ever it is becoming the norm for players to move from club to club in search of the big pay-day or an outfit that will provide them with more chances of trophies or medals. And while it is not always up to the players whether they can stay at the same club for the duration of their career, footballers that have managed to accomplish this have a special place in the hearts of the supporters.

We take a look at 15 incredible footballers who spent their entire professional careers wearing just one badge. 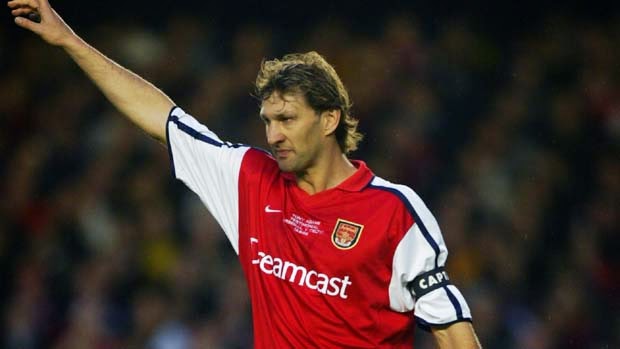 In 1980 Tony Adams joined the Arsenal youth system, a stint that would turn into 22 years at the London club, 19 of which were in a professional playing capacity. In his time at Highbury the English international and London native had won 4 league titles and 3 FA Cup championships with the Gunners. 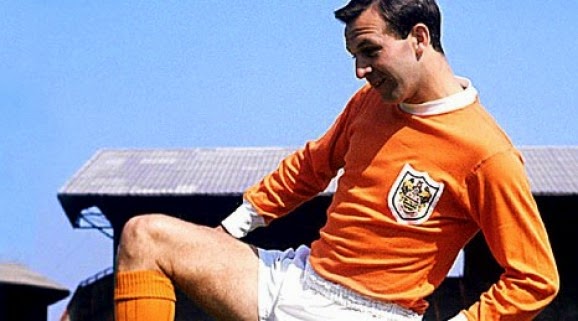 A Blackpool FC legend, Armfield played for the Tangerines for 17 years. Although the full-back did not manage to win any trophies with his club, Armfield was in the England squad that won the World Cup title in 1966. He retired from professional football in 1971. 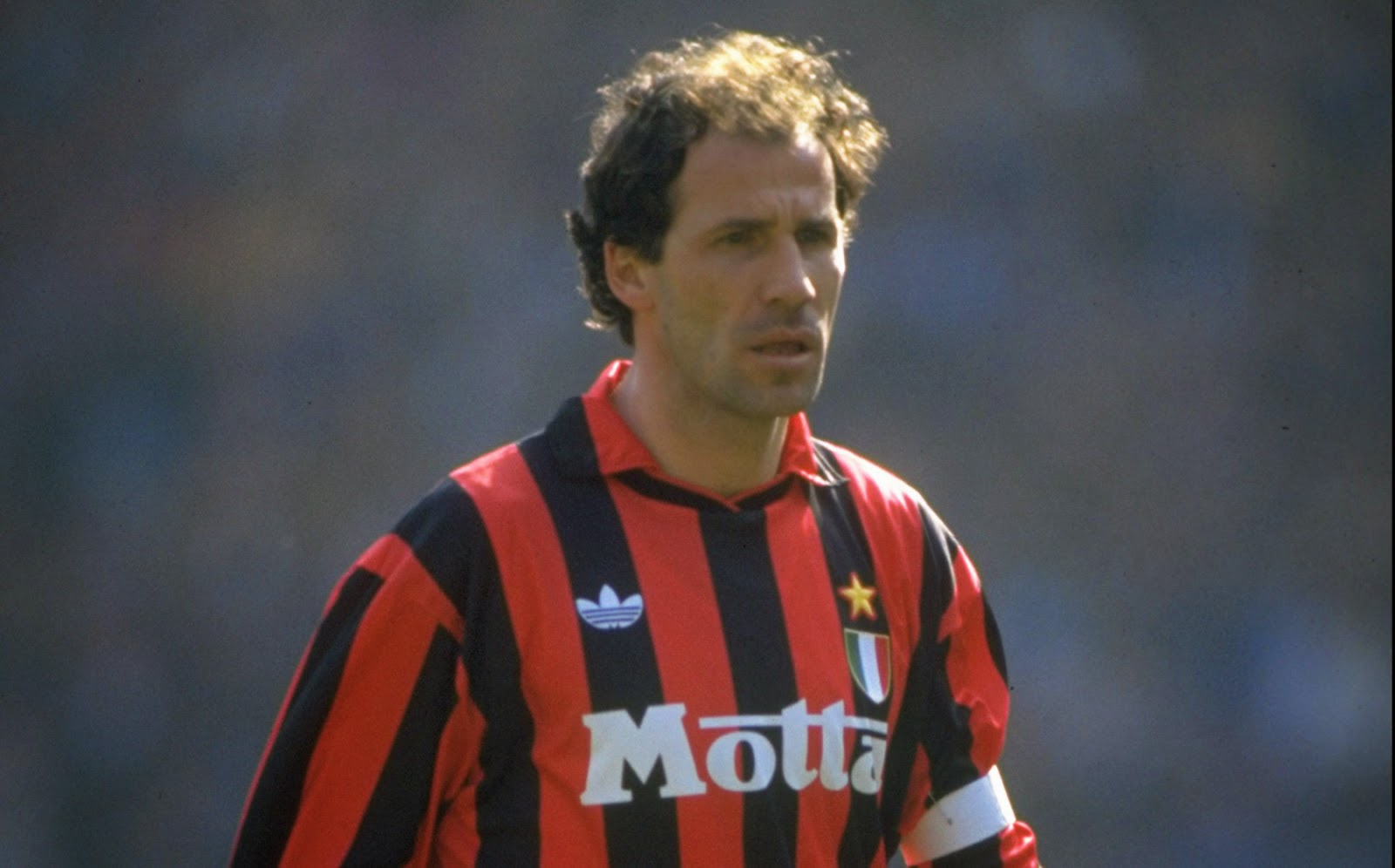 Franco Baresi spent a total of 25 years with AC Milan. His first five were as a youth player, with an additional twenty as a professional, in which he recorded over 500 appearances, winning the Serie A title 6 times and the Champions League / European Cup on 3 occasions. In 1997, the Brescia native retired from professional football. 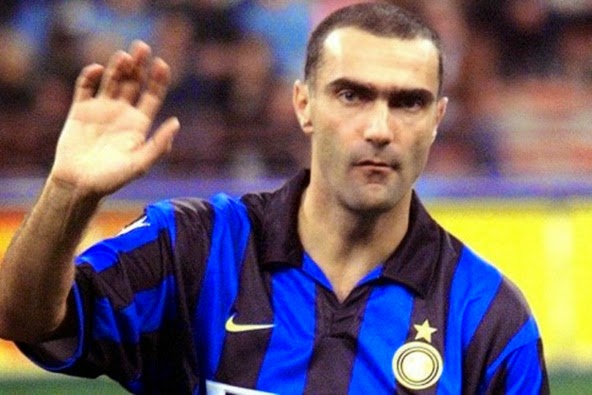 Born in Milano, Bergomi would go on to play for his hometown club for 20 years starting in 1977. In his two decades with Inter, Bergomi won the Italian title just once during the 1988-89 season and was also a part of the Italian squad that went on to win the World Cup in 1982. 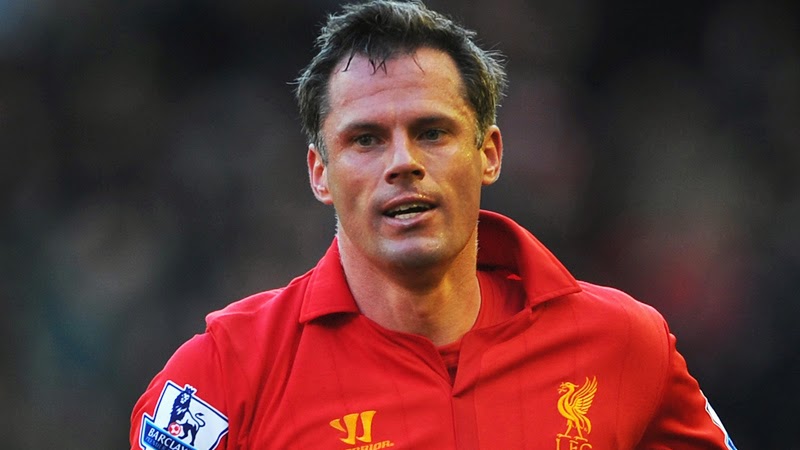 Born in the tiny town of Bootle in Merseyside, Carraagher had switched between Liverpool's and Everton's youth system twice. Once he made his professional debut with the Reds however, he would never leave for another club again. In his 17 year career at Anfield, the English international defender would go on to win the FA Cup twice and the Champions League once with his club, before retiring as a "red" in 2013. 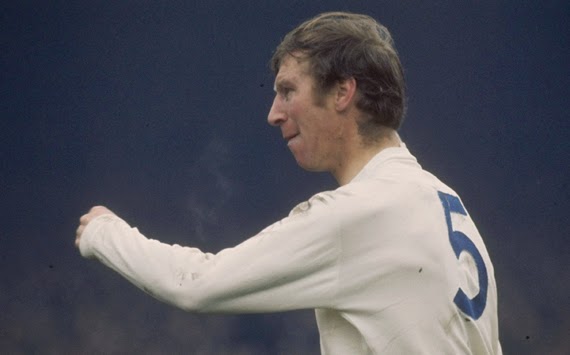 Surely his brother Sir Bobby Charlton would also make this list if he didn't spend a season with Preston North End and Irish club Waterford United late in his career. Jack Charlton however was dedicated to just one club throughout his playing years, that with Leeds United. Picking up his professional debut, Jack would go on to play at Elland Road for 21 years, appearing for his club in over 600 matches. Before his retirement in 1973, Jack helped his club to its first league title in 1969 and an FA Cup win in 1972. 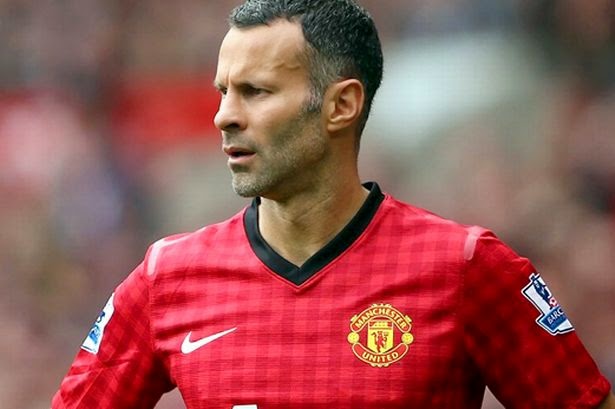 At the age of 15, the Cardiff native Giggs swapped the Manchester City youth system to that of their city rivals United. Fast-forward an astonishing 27 years, and Giggs retired from a storied playing career a "Red-Devil" having never left the club. In his 24 years as a professional at Old-Trafford, Giggs have won the English league title an astonishing 13 times, that on top of his 4 FA Cup and 2 Champion League wins. Although Giggs has retired from playing football he never really left United, picking up various coaching roles with the club. Considering a career plagued by chronic knee problems, Ledley King managed to stay with the Spurs for 13 years before his retirement from football in 2012 at the age of 31. King was an outstanding defender who is said to have gone even longer in his playing career than expected considering his constant injuries. Although he only managed to surpass the 200 match mark in his time with the club, the East London native is still considered by many as one of the better defenders in the club's history. 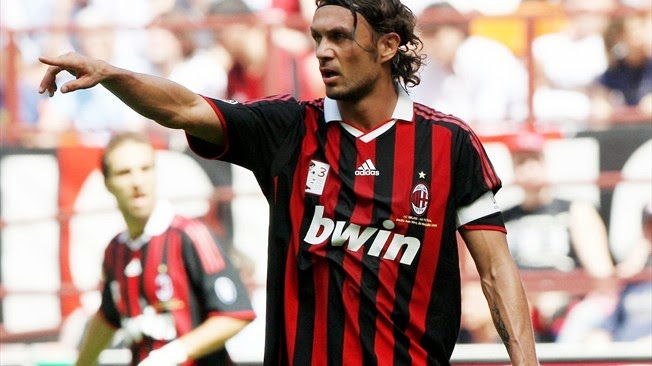 Paolo Maldini was born in Milano in 1968. 10 years later he was already a part of the AC Milan youth system, making his professional debut with the club just seven years after that at the age of 17. Maldini's time with the club totals an incredible 32 years, 25 of which he spent as a professional. In his time with Milan <aldini helped his club to 7 Serie A titles, 5 Champion League / European Club wins and an equal amount of UEFA Super Cup titles as well. After Maldini's retirement at the age of 41 in 2009, his legendary #3 shirt was retired, with nobody able to wear it in the club's future. Maldini did however give  consent to the club that either one of his two sons would be able to wear the number if they so choose if they ever play for AC Milan. 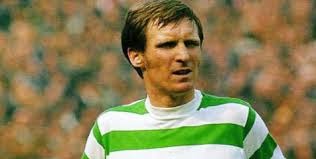 Born in the tiny town of Bellshill (about 12 miles outside of Glasgow), McNeill would go on to record nearly 500 appearances for Celtic in his 18 years at the club. While with the Bhoys, McNeill helped his side to 9 domestic championships, seven Scottish Cup wins and a European Cup title in 1967, before retiring from professional football in 1975. McNeill would go on to manage the only club he had played with on two separate occasions for a total of 9 years. As a manager he managed to provide Celtic supporters with more joy, helping the club to 4 more league titles and 3 cup victories. 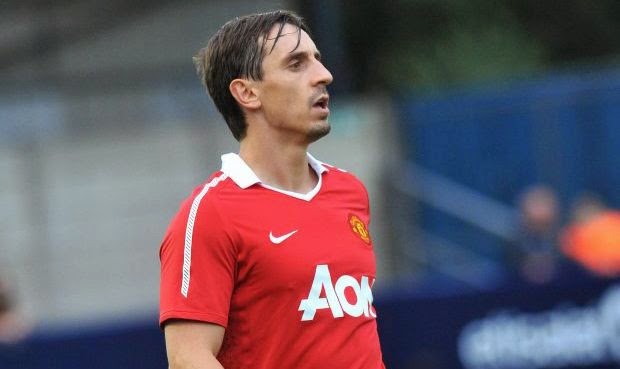 Born in Greater Manchester, Gary Neville spent his entire 19 year professional career with United. In his time with his club the full-back managed to win the Premier League title 8 times, while picking up 3 FA Cup and 2 Champions League wins. Neville retired from football in 2011 for a career in sports television. 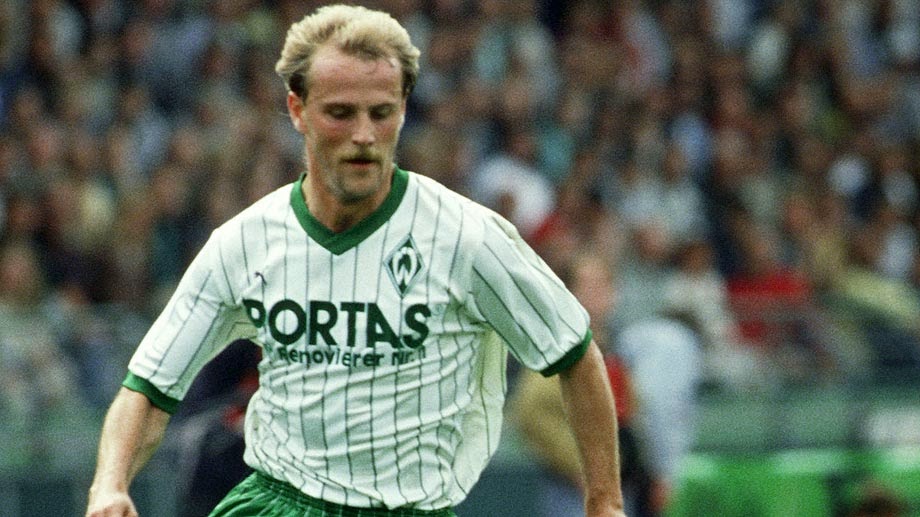 Born over 500 kilometers away from the city of Bremen (in Mannheim), Schaaf arrived at the Werder Bremen youth academy at the age of 11 in 1972. Six years later he made his professional debut, although for the first two years as a pro Schaaf would rotate between the main squad and the reserve squad "Werder Bremen II". When he retired from playing in 1995, Schaaf had already been at the club for a total of 23 years, in which he had won the league title and cup twice. But even after his retirement from playing football, Schaaf went on to stay with the club in various coaching roles for an additional 18 years, eventually becoming the senior squad manager. As the coach of the senior squad Schaaf brought his beloved club another 3 cup wins and a league title during the 2003-04 season. This year Thomas Schaaf left Werder Bremen for the first time after he was appointed the head coach of another German club Eintracht Frankfurt. 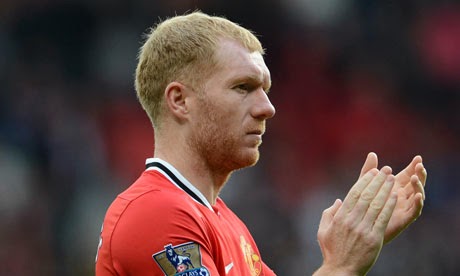 Another Manchester United great, Paul Scholes spent 22 years with the Red Devils, two of which were with the youth system, and twenty years divided between one very long and one short stint. Born in Salford (about 10 minute drive to Manchester city center), Scholes originally retired from football in 2011 after 18 years at the club. In January of 2012 however, Scholes became the hometown hero once more as he returned to the club due to an injury crisis at Old-Trafford, and eventually decided to stay with the club for one more season after that. In his time with the club Scholes enjoyed 11 Premier League titles, 3 FA Cup wins and 2 Champions League wins with the club. 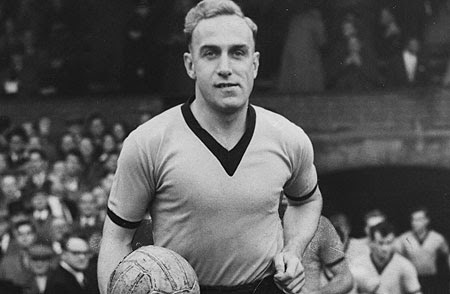 Native of Ironbridge which is about 20 miles outside of Wolverhampton, Billy Wright would become an English football legend being the first to have 100 matches for the English national team to his name and having played in nearly 500 matches for Wolverhapton, a club which he would never leave to play elsewhere, kind of. During World War II Wright did play some matches as a part of the Leicester City squad. This was due to the fact that Wolverhampton have suspended competitive play due to the war, but Wrights participation with Leicester was recorded as "guest player" and therefore was never official. Wright retired in 1959 at the age of 35 and would go on to manage Arsenal for 4 years. Billy Wright passed away in 1994 at the age of 70. 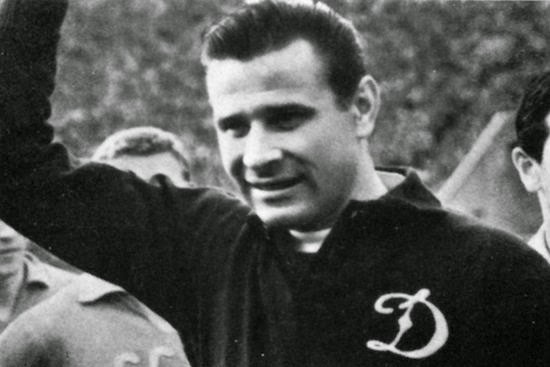 Lev Yashin was so dedicated to his hometown club Dinamo that not only did he play for the football club, he also stood between the pipes for their hockey outfit and even managed to win the USSR Hockey Cup in 1953. With the football club however Yashin spent spent 20 years, the goalkeeper that is still referred to by many as the best ever helped his club to 5 USSR championships and 3 domestic cup wins. Yashin retired both from international and club football in 1970 at the age of 41. To learn more about Lev Yashin's career you can read our World Cup Heroes - Lev Yashin