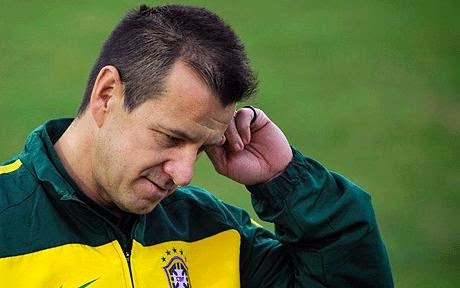 CBF is in search of a new coach and their option has landed on Dunga.


When I came across that story I thought to myself do these people only have the phone numbers of three people? Dunga, was the national team coach during the 2010 World Cup and by all accounts he was not impressive. Sure they didn’t lose any match by 7-1 or 3-0 but they were one uninspired side during that tournament and didn’t make it pass the quarter finals.

Dunga comes across as the lazy choice, in some way Scolari was also the lazy choice. The recycling of coaches that had been in that role before is like going for a first date with your ex-wife. There is a reason why you parted ways to begin with so why revisit the same relationship again, when you know that the failures of the first time will probably be the failures of the second try.

The CBF should look outside the box and not inside their closet. I can respect the fact that perhaps they wanted to have a Brazilian coach in front of their national team instead of a foreigner, but if reports are correct they have approached Pellegrini & Mourinho. So having a foreign coach didn't seem to be a problem. Their prerogative should be to find the best possible man for the job regardless of nationality and I highly doubt that Dunga is that man.

CBF needed to look at their system and pretend it was Lego and tear it up and build it from scratch. The only way they would be able to move pass the situation they are currently in, was to go outside Brazil and find someone that doesn't have any baggage associated with the Federation. Marcelo Bielsa for example would have been a good choice to take over Brazil and make the necessary changes that need to be made in order to have this team back to its full potential. He has a proven track record not only as a team coach but also as a national team coach. He was probably not even on their radar, they instead went with the safe and yet unwise choice of Dunga.

Now that Dunga has been appointed I expect Brazil international spiral to continue, and the restructuring that needs to happen to never take place. This is nothing more than spraying Febreze over a pile of crap hoping the smell goes away.