The Uncertain Future of Ukrainian Football 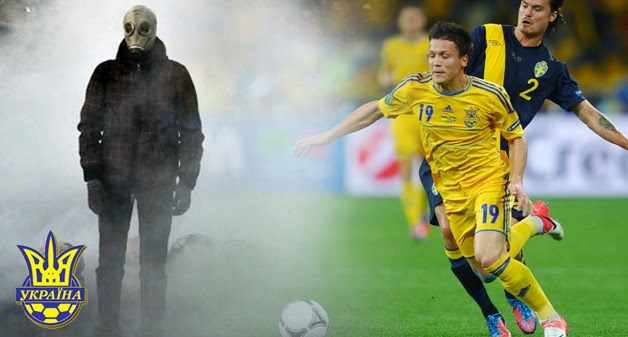 Since its independence from the Soviet Union in 1991 and its national team's recognition by football's governing body FIFA in 1994, Ukraine has been steadily building a national football program that has been growing impressively at all levels. With its league squads performing admirably in European club competitions and the national team producing some world-class footballers, the future was looking bright for the Eastern European nation who had to start from “scratch” after the division of the Soviet national squad. With numerous Ukrainian nationals choosing to represent Russia in international football after the Soviet split, the Football Federation of Ukraine had its hands full, trying to develop a national squad without some of its biggest stars.

Fast-forward 20 years, and football in Ukraine seems to be on a very bright path. International stars such as Andriy Voronin, Anatoliy Tymoshchuk and Andriy Shevchenko have been hailed heroes both in their native Ukraine and in their clubs outside of their country of birth. New generation footballers the likes of Andriy Yarmolenko and Yevhen Konoplyanka are being scouted and courted by various "giant" clubs around Europe. The Ukrainian national team surprised many with their run to the quarter-finals in Germany during the 2006 World Cup, losing out to the eventual champions Italy. The Ukrainian national youth level squads also performed impressively, winning the U19 European championship in 2009. Co-hosting the 2012 Euros with Poland, put the “yellow-blue” on an even higher scale of international football. Ukrainian clubs have enjoyed some international success also, with Dynamo Kyiv taking the Champions League by storm, qualifying to the later stages in the late 1990’s. And of course the emergence of nine time Ukrainian champions (since 2002) Shakhtar Donetsk, capped by their incredible UEFA Cup title in 2009.

But since November of 2013, Ukraine has been in turmoil. What started with demonstrations against the Ukrainian government’s decision to side with Russia instead of the European Union, turned into a full blown civil catastrophe, a war with Russian separatists and a disaster of global proportions.

With the uncertainty of the country’s future, its football is starting to feel the effects as well. Amidst growing tensions between the Ukrainian government and the Russian separatists, the fighting in Donetsk and the Malaysian airline disaster over Ukrainian skies, football may seem irrelevant and not important. But as world history is written, so are the moments that shape and change the wonderful game of football; the protests of “Euromaidan” on the 21st of November 2013, may very well write a new chapter in its footballing history as well.

This past Friday, UEFA’s Emergency Panel has decided to keep Ukrainian and Russian clubs apart in this year’s European club competitions. And earlier today it was reported that numerous non-Ukrainian footballers playing in the Ukrainian league for Shakhtar Donetsk and Metalist Kharkiv refused to report to their clubs, and travel to Ukraine altogether as a result of fear for their safety and well-being. These two events may seem miniscule compared to the devastation experienced in the football league of former Yugoslavia for instance. But what does the future hold? And what would happen to football in Ukraine if this civil unrest progresses?

The Ukrainian national team is set to begin their qualifying campaign for the 2016 Euros in September. If fighting continues within its borders it is likely that UEFA will decide to have all or some of Ukraine’s matches played in neutral venues. Cyprus seems to be a preferred European destination for most troubled UEFA nations, but while it’s a beautiful getaway, the small Mediterranean island offers very little in terms of home atmosphere and support, something that is very present for Ukraine’s home matches in cities like Kiev, Donetsk and Lviv.

In four years the FIFA World Cup will be hosted in Russia. It is not unlikely that the Ukrainian national team could decide not to take part in the qualifying stages for that particular competition. Sports’ history is filled with nations refusing to travel to certain destinations due to political tension and clashing religious belief, and the current state between the formerly joint nations could present an identical outcome. With the lack of international participation, the development of Ukrainian’s national football program will suffer.

As unjust as it is, football and politics go hand-in-hand and the current state of the Ukrainian people is starting to place its mark on its previously impressively developing game. And while nobody knows exactly what the future holds for the Eastern European region, it is quite clear that the Ukrainian national team that achieved FIFA ranking as high as 11th in 2007 is going to feel the negative effect of its country’s political misfortunes. Czechoslovakia and Yugoslavia were also once impressive footballing nations, with their progress halted by war and regional splits. Ukraine’s current state is no different, with clashing ideologies threatening to cut the nation and its football in half.