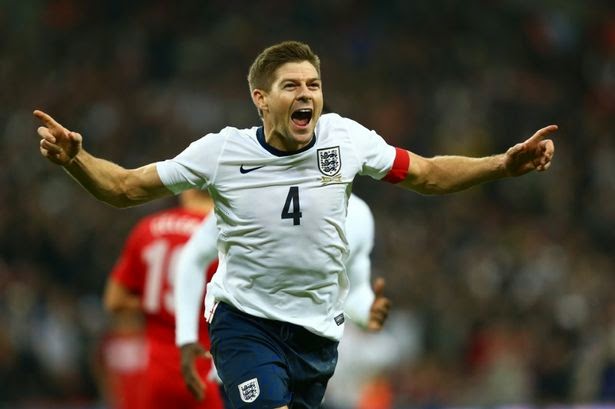 England captain, Steven Gerrard has announced yesterday that he is retiring from international football.


The 2014 World Cup in Brazil this summer was the last time he would represent England at a major tournament. He made the announcement on Monday, which he confirms wasn’t an easy one to do. The 34 year old Liverpool midfielder has 114 appearances with England over a span of 14 years.

He was one of the few old guard players that still made it to the World Cup squad, but at the age of 34 he must have known that the changes would be coming, either by his own hand or forced on him by someone else. England is looking at rebuilding their national team, and Steven Gerrard would not be a part of that project, he is wise and intelligent enough to see it. I believe he made the best decision for himself. Nothing worse than overstaying your welcome, which is a mistake so many players seem to do.

I don’t believe he would be in England squad for the 2016 Euro and he would without a doubt not be in the 2018 World Cup in Russia. While always a difficult decision to make, it is always better to do it in your own terms and leave gracefully. This allows him to also concentrate on his club career and perhaps extend it for a couple more seasons at a high level.

The iconic Liverpool midfielder departure will allow the new upcoming and talented young midfielders that England has a chance to step out of his shadow and be accounted for. While the news of his retirement from international duty may be sad for some I believe it will be a blessing for the national program and also for his club. Both country and club have the most to gain from this announcement and deep inside I am sure neither one is really devastated by it.

A look at Steven Gerrard last goal for England, it came during World Cup qualifying against Poland on October 15, 2013 at Wembley Stadium. England won the game 2-0.