Top 5 Songs That are Used for Football Chants 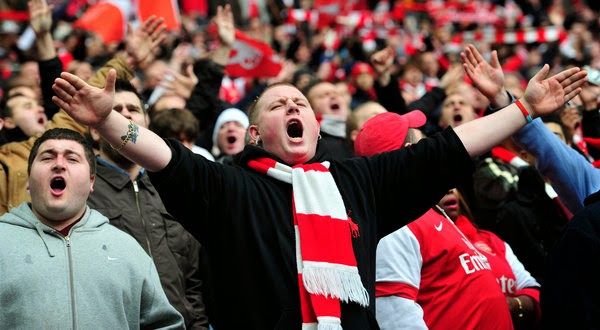 Football chants are sung at grounds throughout the globe and have been become as synonymous to the beautiful game as much as goals and saves are. With that, we present our top five songs that have gone on to become an anthem for various chants that are heard at football stadiums:

This chant is inspired by the classic Beach Boys song from their biggest album, Pet Sounds, however the chorus to this song has become perhaps the scourge of the Premiership – there have petitions to get the chant banned from football grounds! Here are some Arsenal supporters belting out this one at an away game in Sunderland:

Many a Premiership manager has hear this chant, inspired by a Cuban patriotic tune, sung by fans of opposing squads when a blowout has occurred. Andre Villas Boas heard this one sung at White Heart Lane after a massive victory by Liverpool in December and literally did not have a job the next day:

Men Without Hats were a pretty nondescript musical group but the catchy chorus of their hit Pop Goes the World, combined with the first ever goal scorer in Toronto FC’s history, gave birth to this chant that is sung at pretty much every game at about the 24th minute:

The lovely Doris Day sang this song which ultimately garnered an Academy Award for Best Original Song in 1956 however English clubs have ensure that the clever chorus is sung often at football grounds. Here are some Chelsea fans relishing an upcoming trip to Munch in 2012:

The Battle Hymn of the Republic

A well known American patriotic song has its chorus sung all over various terraces in England. Manchester United’s new shirt sponsor Chevrolet has recently used a red devil centric version of the song in a recent advertisement: