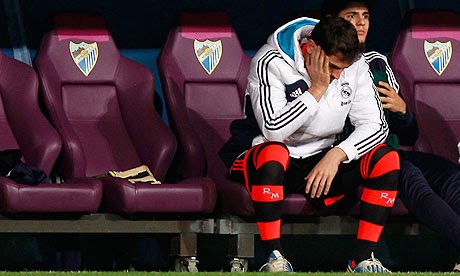 All the teams are looking at improving their squad, summer transfer window is open and clubs are looking at adding and removing pieces. Nobody spends more and moves more players during this time than Real Madrid, so why not have some fun with it and look at the 10 signs that they are about to sell you to another team.

Your jersey number has been assigned to one of the ball boys that happen to be the son of the PR director. If you come in to the locker room and you find your jersey number is gone and you have a blank space on the back of the kit, and during practice there is a ball boy walking around with your number, you know your days are numbered.

You are not selected to the pre-season tour of North America. You find out that your team is doing a pre-season tour, and when you look at the names picked to participate you find everybody, even 5 call ups from the U20 squad but your name is not on the list you know something is up. It is not like you were at the World Cup during the summer; the closest to the World Cup you got was playing FIFA on XBOX with your moocher friends.

Your jerseys have been removed from the team store. If the club store is no longer selling your jerseys you should know that a deal is in the works, obviously the club will tell you that they removed them because your name was misspelled and some of them came with some defects.

Your agent has approached you asking if you would like to move to a place where there are no taxes and tries to explain you how much you are losing from your salary for paying so many taxes in Spain. He keeps selling on the idea that you could make more elsewhere even if you sign for less just on the taxes you would save.

Overnight you lose 1 million followers and you gain 10 followers from QPR. You find it strange but your agent tells you that Twitter is over rated and branching out to other leagues and fans is the best way you can build your brand.

He sends a letter to all the fans through the club site expressing how he is excited to join the club and play with incredible players. He mentions everybody on the team except you. You might think it is just an error, someone forgot to add your name but at clubs like Real Madrid there are no errors when sending out a communication.

The club removes your parking spot, assigning it to the new signing and moves you to an adjacent parking area where team employees park. When asked why they have moved you so far away, they tell you that the extra walking that you will have to do now is part of your rehab assignment, even though you aren’t injured.

You are getting ready to sit down and play some FIFA on your XBOX, when you receive an updated roster patch in which you have been sold to Zenit in Russia. When you inquire about it with the club they blame it on a Microsoft error, and remind you how bad they have been with Windows updates.

You arrive at practice and your access card to the building is not working. This is the ultimate hint that the team has transferred you and you are no longer on the active roster. Sure someone will probably tell you to go home and wait to hear back from them on when the access problem will be fixed, but the next call you get is from your agent telling you that you have been sold.
SHARE SHARE SHARE