Ronaldinho in Toronto: Show Him The Money 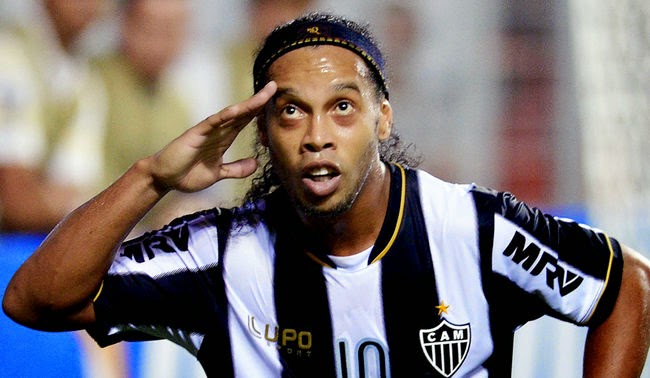 Ronaldinho announced today that he was leaving Atletico Mineiro as a free agent.

What the next step on his career will be is not clear, he said that he would announce it on Wednesday (July 30th) where he would be playing next. The rumors started almost as quickly as his announcement was finished of where Ronaldinho would take his talents next. The speculation is running rapid with most guessing that his destination will either be Australia or MLS.

I would like to see him make a move to MLS but currently the season is at the halfway point, so I am not sure if he could join a team now, or perhaps sign a deal that would see him start the 2015 season in the MLS and be another name added to the incredible list of names that will make their debut in 2015. Lampard, Villa, Kaka and the possibility of Robinho and Xavi are some of the incredible names that will add flair to a league that is growing in popularity and quality. Ronaldinho would perhaps be the biggest name of them all, if he was to join MLS at any point in the near future.

Teams that have money and an available DP slot would be drooling over the opportunity to sign the former Ballon d’Or winner. The obvious front runners for his signature would be both NYRB & NYCFC. Perhaps LA Galaxy and Orlando City SC could also enter the mix, but a team that could perhaps offer him a better deal and situation would be Toronto FC. Currently they have all DP slots taken, but if you believe the rumors circulating the team, they are looking at offloading Gilberto and free up a DP slot.

Toronto FC has the deep pockets needed to sign Ronaldinho, so from a pure money perspective, offering him a contract he couldn’t say not to should be the easiest part of the deal, and in the case of Ronaldinho it might be the only part of the deal that he would really care about. When you look at Toronto FC making a move it will depend on who else enters the race. If Los Angeles or either NY team enters this race, Toronto FC will have to over pay to get him, but it all depends on what your definition of overpaying is. They will have to pay more than anyone else, but whatever they would pay him would be worth every single penny.

He brings quality to a midfield that lacks a player of his ability to pass, hold the ball and dictate the offensive movements of his team. Defoe and Bradley would improve with his addition to the team, and they would also be adding a player that could score from free kicks. He is still the total package, he is still a difference maker and he is a player that would sell seats, jerseys and season tickets. He would be the perfect DP for Toronto, and I wonder if Toronto FC brass sees it.

Toronto has a huge Portuguese and Brazilian community, that might be a selling point for Ronaldinho, but I believe in the end his decision will be based on one thing only, MONEY. MLSE lacks titles, but one thing they don’t lack is money, could this be the match made in soccer heaven? We will find out shortly.