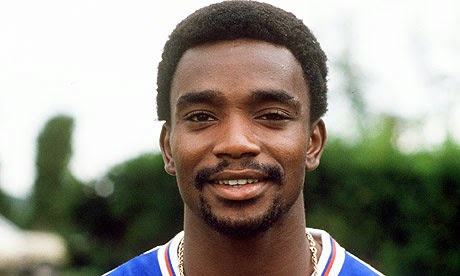 Yesterday marked the 25th anniversary of the death of Laurie Cunningham.

Starting his career with Leyton Orient the flying winger would make his name with West Bromwich Albion, after a move to the Midlands club in 1977.

At time when conditions were incredibly difficult for non-white players in the English top division, Cunningham came in for some horrific racial abuse from the terraces. Although it would have been a lot for a young player to cope with, he let his skill and pace do the talking for him, as Cunningham lit up the old First Division and quickly attracted attention for his performances.

In the April 1977, Cunningham became only the second black player to represent England at any level as he debuted, and scored, for England U-21’s against Scotland.

Back at the Hawthorns, together with Cyrille Regis and Brendon Batson, Cunningham became part of only the second trio of black players to be fielded by one side in the English top flight. Under manager Ron Atkinson, the three players and future Manchester United skipper Bryan Robson formed the core of arguably the best West Brom side in the past fifty years. Playing stylish attacking football, the Baggies finished third in 1978-1979, their highest league finish in more than twenty years.

His thrilling displays on the wing had not gone unnoticed outside of the British Isles though, as Spanish giants Real Madrid came in with a massive bid, at the time, of £950,000 in the summer of 1979. West Brom had no choice but to accept the offer and Cunningham thus became the first British player to represent Los Blancos.

Getting off to a flying start at the Bernabéu, the winger scored twice on his debut and helped the club capture a Spanish league and cup double in his first season in Madrid.

Despite helping Madrid reach the final of the 1981 European Cup, where they would lose 1-0 to Liverpool, the next few years saw Cunningham plagued with injuries.

He bounced around between a few clubs during the mid-1980’s, but found a bit of glory back in England when he helped minnows Wimbledon win the 1988 FA Cup. After leaving Wimbledon, he spent the 1988-1989 season back in Spain at second division Rayo Vallecano, where he scored the goal that clinched promotion for the Madrid side back into La Liga.

Reflecting on the memory of his friend and former teammate Cyrille Regis had the following to say, “Laurie’s greatest legacy was the inspiration he provided to the players who were a few years behind us. Players such as John Barnes and Ian Wright. Because he was an attacking, exciting footballer, he captured their imaginations like no other. That’s his greatest legacy. They still talk about him with wonder even now.”

Below are some highlights of Cunnigham in action for West Bromwich Albion.