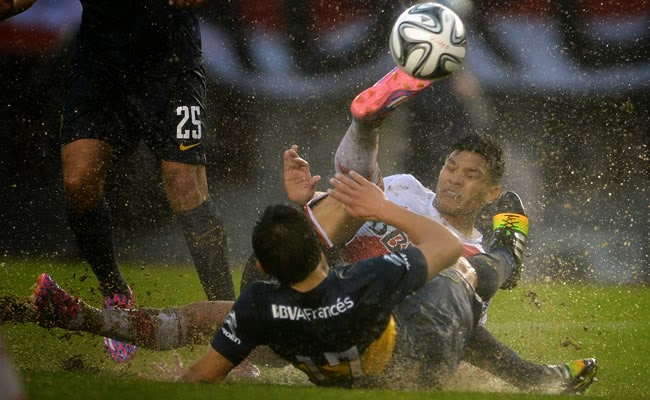 This week on the recap we have highlights from England, Holland, Germany and of course the always entertaining derby from Buenos Aires between River Plate and Boca Juniors.

Everton has not enjoyed a good start to their EPL campaign, nonetheless it seems that United are slowly putting their pieces together and are starting to gel more or less. Leighton Baines' missed penalty-kick however could have handed the hosts another unfavorable home result, but with Radamel Falcao breaking his duck and scoring the match-winning goal, perhaps Van Gaal's side can turn their fortunes around and save a campaign which started off not in impressive fashion.

Pederborn lost the lead twice for the eventual 2-2 draw at Bayer Leverkusen. With the score at 1-1 and a red card to Marvin Bakalorz in the 72nd minute however, it did not seem likely that the visitors could even hold on for the single point. They even took the 2-1 lead with a man down in the 87th, but with seconds left on the play clock the hosts would take away a point from the meeting.

Great action from Holland as hosts AZ lost an early 1-0 to go behind by a goal thanks to goals from youngster Kyle Ebecilio and Hakim Ziyech. But the hosts would claim a point, scoring a wonderful game-tying goal in the 85th minute.

The return of Cesc Fabregas to face his old team was a story big enough. But when he sent in a perfect long ball to striker Diego Costa for Chelsea's second goal, the Spanish international celebrated in a fashion that can make one believe that he is enjoying his current spell with the Blues very much. Oh yes, there was that shoving match between Arsene Wenger and Jose Mourinho.

Derby day in Buenos Aires is always special and it was no different this past Sunday. The crowd was at their best and loudest, and the match was heated and packed with entertainment value that surpasses even the incredible display of football brilliance. 1-1 was the score at final whistle, a score that seems rather ordinary and dull, but the match was nothing of the kind. Pouring rain, two red cards, a penalty-kick that should not have been called, heavy arguing and shoving of the referee and a penalty miss were all part of this meeting, so without spoiling all the fun, the video below is a must watch!