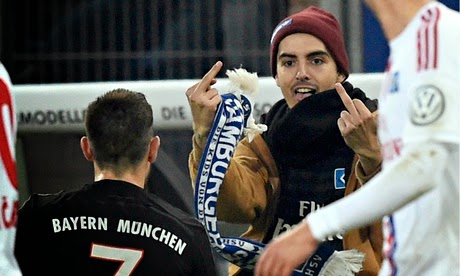 With Bayern Munich comfortably seeing off Hamburg in their Second Round DFB-Pokal match yesterday by the score of 3-1, the night ended on an ugly note when a pitch invader slapped Franck Ribéry.

Goals by Robert Lewandowski and David Alaba put Bayern ahead by two by the break, and after Ribéry himself added a third the match was essentially over.

Pierre-Michel Lasogga got a late consolation for Hamburg shortly before an idiot ran onto the pitch and proceeded to smack the French winger in the face with his scarf.

While flicking his middle fingers up at Ribéry and  hurling insults, the man was dragged off by security, but not before Claudio Pizarro attempted to take his head off with the ball.

Ribéry, to his great credit, remained calm and later said, "Fortunately, nothing much happened. It was a difficult situation though – I didn’t see him coming. But this is football, things like this can happen. I’m just glad we played well."

It was lucky for the fan that Ribéry was in a serene mood, as the Bayern player has been known in the past to be a bit 'fiery' to say the least.