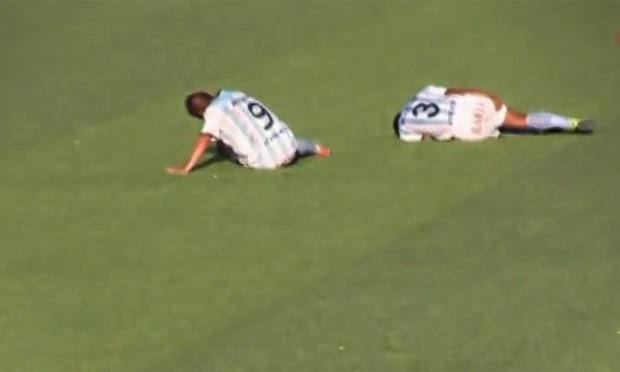 Diving and faking injuries is, besides Sepp Blatter, the biggest scourge of the modern game.


Call me a misty eyed romantic, but I believe matches should be played with a certain degree of honesty and sportsmanship. Sure, football should be physical and those who play it should
be committed, but there's nothing worse than seeing a player roll around with nothing wrong with him.

One of the worst examples of cheating on the modern game appeared this weekend when, a referee was forced to suspend a cup tie in northern Peru after five players went down injured, eight minutes from time, in a bid to get the game abandoned.

Trailing  4-1 in the first leg of the Copa Peru semi-final against Defensor La Bocana this past Sunday, five Defensor Bolivar hit the deck in attempt to have the match abandoned.

With a side needing seven players on the pitch to complete a match the dastardly Bolivar players, who were already down by ten men thanks to a red card, decided to throw in the towel and get the result somehow wiped out.

Not only did the players go down, but they allegedly pretended to wiggle around on the grass as if they were really hurt.

Despite the referees efforts to bring order the beleaguered official had no choice but to call the match off.

With the second leg coming up on Thursday, the Peruvian FA has a big decision to make on how they are appropriately punish the offending club and sort out this general mess.

Easier said than done when dealing with such a messy affair.

Meanwhile an understandably furious La Bocana side has uploaded footage of the incident to YouTube.