Kieron Dyer Finally Tells All About THAT Fight With Lee Bowyer 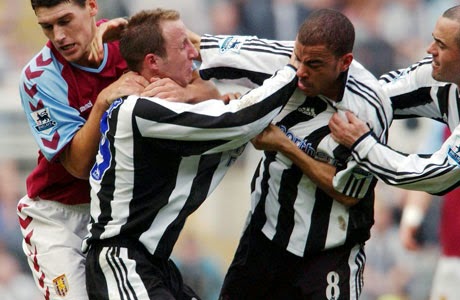 During a solid, but unspectacular playing career one thing Lee Bowyer was known for was his combative nature, which was something that often landed him in trouble.

This was never more evident than in his notorious on pitch scrap with Newcastle United teammate Kieron Dyer back in 2005.

In the middle of a 3-0 defeat to Aston Villa, out of nowhere the two men came to blows with Bowyer raining fists down on his bemused teammate. 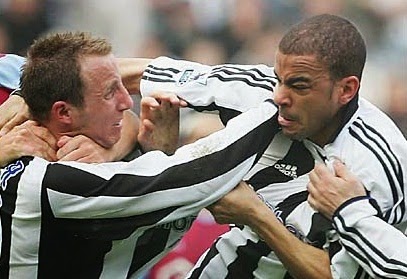 The reason for their scrap, and what occurred afterwards other than an awkward picture of the two shaking hands, has never been revealed. That is until today.

Speaking to the Newcastle Evening Chronicle, Dyer has finally spilled the beans on what sparked this little melee.

“We were playing the game, he came short and wanted the ball and I passed to someone else.
“He was like ‘Give me the ball’ and I was like ‘I haven’t given the ball away, what you talking about’.
Five minutes later he came again and I gave it to somebody else and he said, ‘You never pass to me!’
I said, ‘The reason I don’t pass to you is because you’re shit, basically’.
“There were a lot of swear words. And that was it, then you just saw him lose his head.
“He said, ‘You what?’ And I said, ‘You heard me.’
“As he was walking towards me I just thought he was going to grab me or push me.
“When he was raining the punches in I thought, ‘You need to get on the weights because they aren't hurting.’
“Secondly, I was thinking ‘I can’t believe he’s doing this in front of 50,000 people’.” 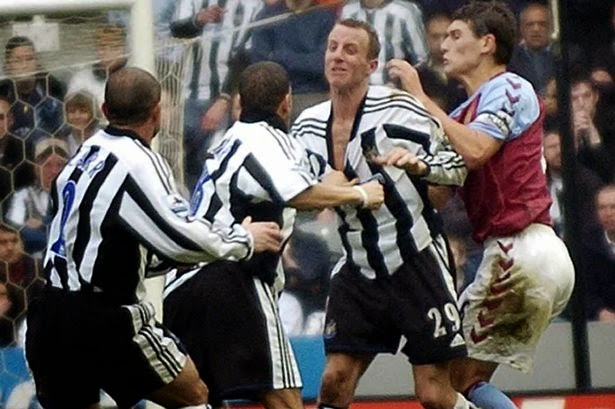 But this was just what occurred on the pitch, back in the dressing room things carried on after defender Jean-Alain Boumsong urged the two to finish fighting, which they started to oblige, before notorious former hard man and then Newcastle boss Graeme Souness offered to fight them both.

They both thought better of it after the steely Scot put this out there and ceased hostilities.

Captain Alan Shearer was also less than impressed with the pair and yelled at them for disgracing themselves and the club. 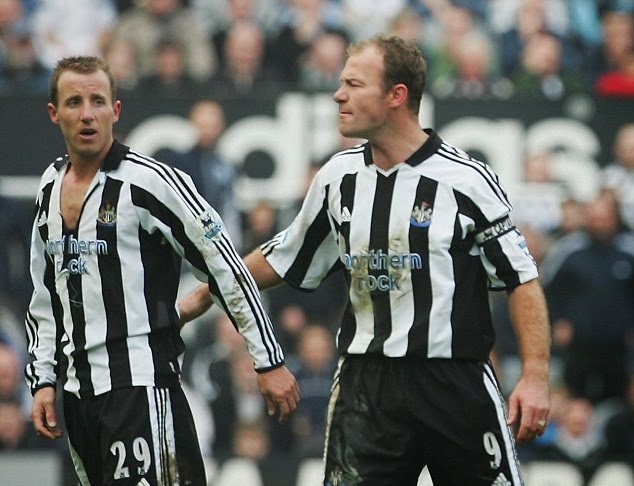 “I didn’t know you could get sent off for fighting your own team-mate, so when the red card came out I thought, ‘What the hell!’
“I was sent off first and I was waiting in the tunnel to get some revenge.
“He came in, and we had two massive masseurs and they just dunked us on their shoulders.
“It was like a cartoon when your feet are dangling off the ground and we were trying to get at each other.
“We are sat in the changing room and they were in the middle of us.
“I was thinking how I could get to him. Then we heard the final whistle.
“Boumsong came in and said, ‘If you want to fight, fight now.’ I was wanting to fight and get the revenge.
“Then Souness came in and said, ‘If you want to fight I’ll beat both of you.’
“[Alan Shearer] came in and I never saw him lose it like that – he went mad and called us selfish and a disgrace.
“He knew we’d have a three-match suspension and miss the FA Cup semi-final that was coming up.”

The two players, who would later become teammates again at West Ham United, have since made up and actually see each other quite often. So there’s no bad blood and they can both laugh now about a pretty ridiculous incident.