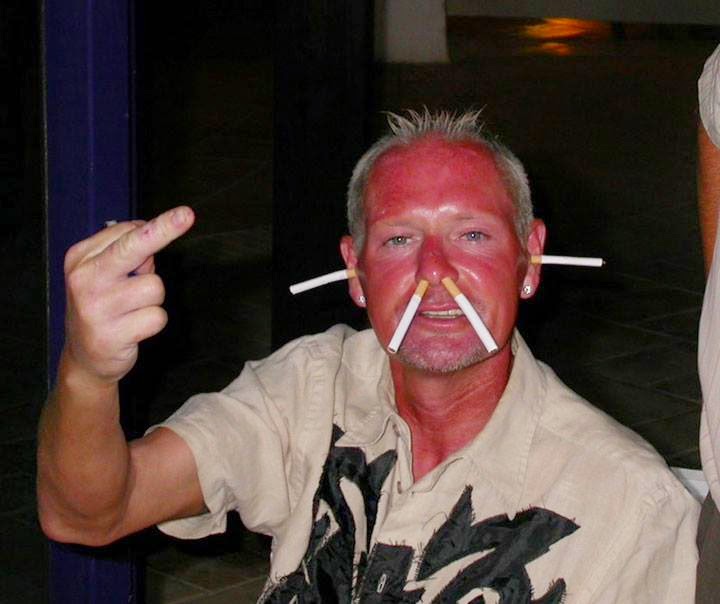 Some would consider it a tragedy that England's, arguably, most naturally gifted player of the past thirty years, Paul Gascoigne has had such a troubled life off of the pitch.

Starting his career at his beloved Newcastle United in 1985, the Geordie midfielder was immediately marked out as an exceptional talent, but someone who was a bit erratic, to put it lightly.

Newcastle defender John Bailey said the then 18 year old was, "either going to be one of the greats or finish up at 40, bitter about wasting such talent." 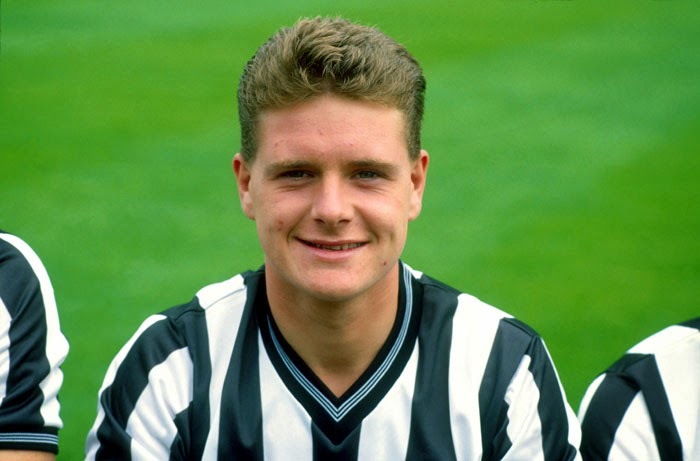 In a way, both things would come to pass as he both dazzled and frustrated his fans in equal measure during his career.

Despite people questioning his attitude, even as a youngster, he was convinced he was going to make it. He later recounted this story from his school days, “I was practising autographs [in a geography lesson] and the teacher Mr Hepworth said, “What are you doing that for?” And I said, “I am going to be a professional footballer.” He said, “Only one in a million make it” and I said, “I am going to be that one.” I got kicked out of the classroom.

After the World Cup in 1990, the only thing I could think of was Mr Hepworth. I knew what class he was in so I went to the school and knocked on his door. I looked in his little window and he looked at us and went, “I know.””

A complex character, who had come from a poor family, Gazza was bursting with energy as a youngster and although his talent was there for all to see, Newcastle were on the verge of cutting him loose on numerous occasions.

In fact, the Magpie's manager when Gazza made his debut, Jackie Charlton, had intended on releasing him, but Gascoigne burst into tears in his office and Charlton ended up relenting and keeping him on. It wouldn't be the last time that Gazza's tears would have an effect on his career.

After a strong first few seasons in a poor Newcastle side, Gazza jumped to national attention in a less than desirable way when he was famously pictured having his genitals squeezed by Wimbledon hard man Vinnie Jones. 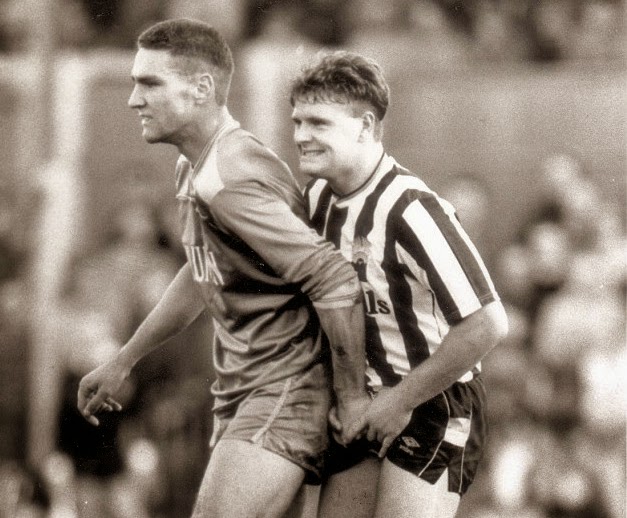 On a positive note his inspirational play for his hometown club brought him to the attention of England's bigger sides and despite promising Alex Ferguson that he would join Manchester United, he instead signed for Tottenham Hotspur in the summer of 1988.

Ferguson would later claim that Spurs only won his signature after buying a house for Gazza's impoverished mother and father.

Gazza later admitted that not only did Spurs buy his family a house, but they also bought his dad a BMW and his sister a sunbed.

London was not the best destination for the young Geordie, as the temptations of the big city worsened his propensity for getting into mischief off the pitch, often with his entourage that included his best mate, the aptly named Jimmy Five Bellies.

During one Spurs training session, one of the players kicked the ball over the fence. Gazza said ”Don’t worry, I’ll get it”, jumped over the fence, and completely vanished for the rest of the day. The next day, approximately 24 hours later, Gascoigne jumped back over the fence, with the ball under his arm, completely straight faced saying ”I got it!”

Night club fights, drinking binges and wild practical jokes did not stop Gazza getting into the England team and eventually shining at the 1990 World Cup.

Even though his inspired play led England to the World Cup semi final, despite slipping out for a few of his now troublesome drinking sessions during the tournament, Gazza became most remembered for bursting into tears after being shown a yellow card against West Germany in the Semi Final. The card, his second of the World Cup, would have seen him suspended for the final if England would have won the match.

England eventually crashed out on penalties and the image of a tearful Gazza kissing the Three Lions badge became an iconic image and he shot to superstar status back home. 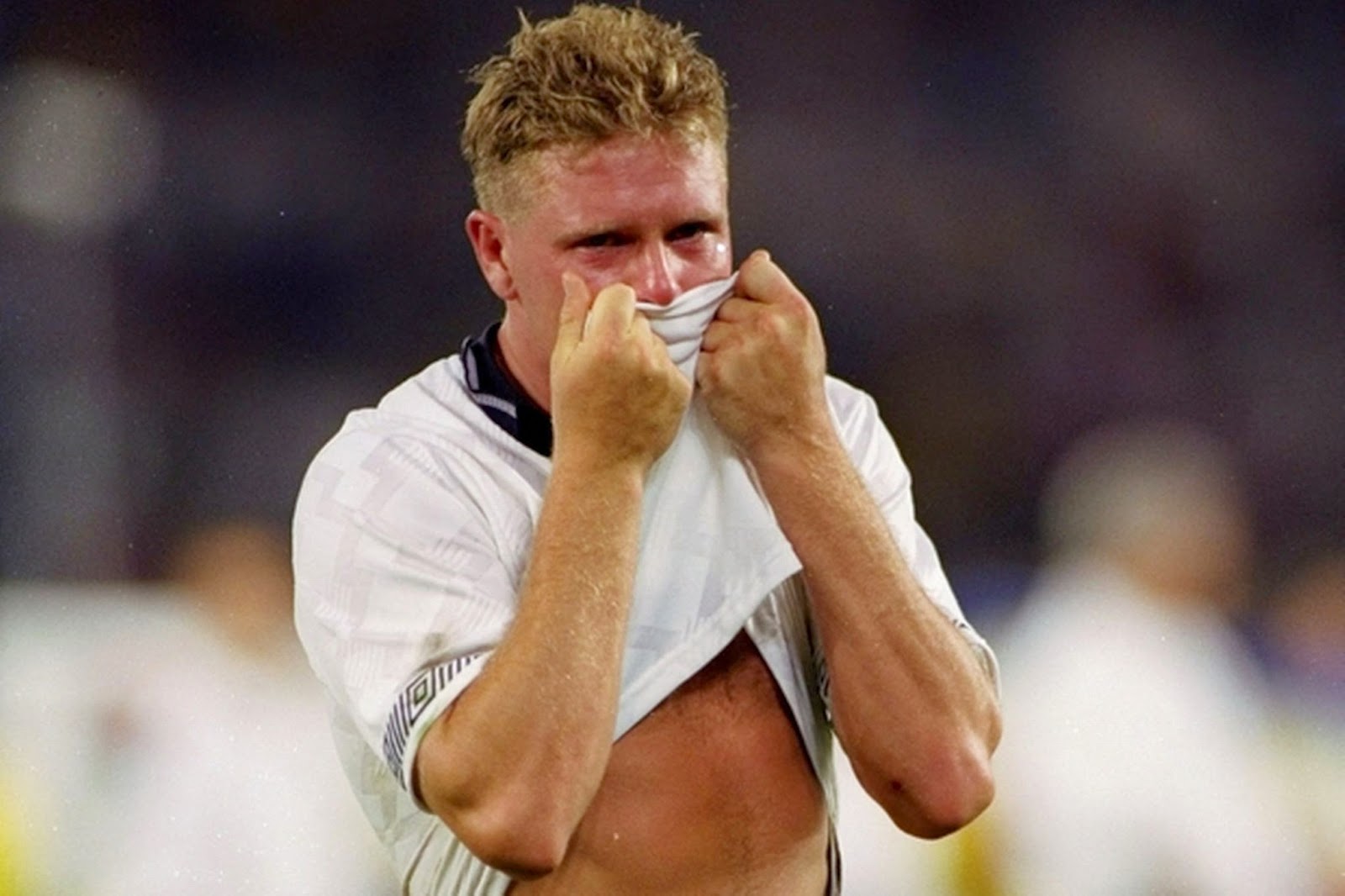 After agreeing to a move to Italian giants Lazio in 1991, Gazza signed off with Spurs by rupturing his cruciate ligaments when flying into a wild tackle on Nottingham Forest's Gary Charles in the FA Cup Final.

His knee was further damaged in late 1991 when he injured it again in a fight at a Newcastle nightclub.

Eventually he did move to Italy, but didn't endear himself to the Lazio owner when he said "Tua figlia, grande tette" (roughly translated as "Your daughter, big tits") when the two first met.

He also caused a storm with the press when he started a press conference by belching into the microphone.

Gazza also caused a stir at an Italian restaurant when, while struggling to order his dinner, he took matters into his own hands and dove into a lobster tank in his suit and grabbed his own dinner.

Around this time, while playing for England, Gazza was asked by a Norwegian reporter if he had any words for the people of Norway and he responded by yelling, "Fuck off Norway" into the reporter's microphone. 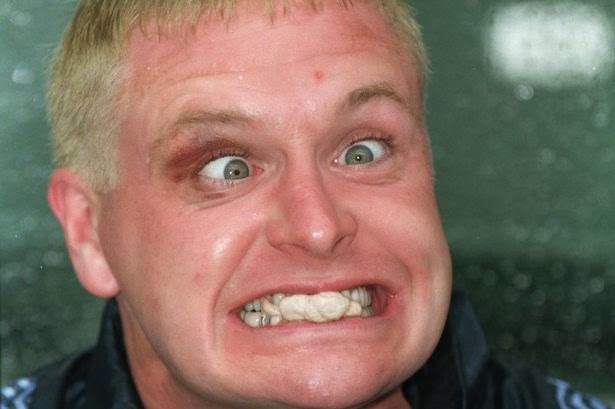 After a less than successful time in Italy, that included many instances of wild behaviour as described above, he moved on to Glasgow Rangers.

He rebounded well for a short period at the club, winning the player of the year award in his first season, and doing well for England at Euro 96, but his wild lifestyle began to trouble him again.

Pictured drunk with DJ Chris Evans, while tucking into a 'post session' kebab,  shortly before the 1998 World Cup, he was dropped from the England squad by Glenn Hoddle. He proceeded to smash up Hoddle's office, before having to be restrained.

Gascoigne's international career, which offered so much, was effectively over.

With further spells at Middlesbrough and Everton hindered by Gazza's drinking which was now resulting in blackouts, his career petered out.

Since his retirement Gascoigne has battled alcoholism, been diagnosed with bipolar disorder, suffered from obsessive compulsive disorder and has generally struggled to find a place for himself inside or outside of the game. 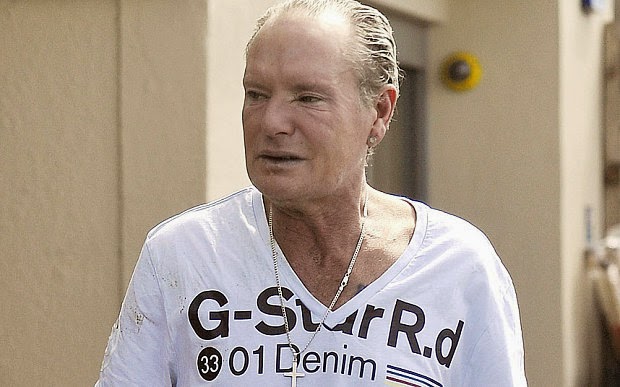 It truly has been sad to witness the decline of such a supremely gifted player and a man who brought joy to so many people. Let's hope that he can one day get, and accept, the help that he desperately needs before it's too late.
SHARE SHARE SHARE