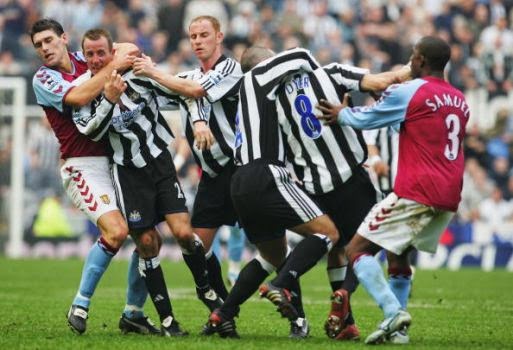 During the heat of battle it is very common to see players on the field going beyond the limits of what is allowed by the game. What is not very common is for their passion to boil over and turn see teammates turn on each other.

Those are rare moments, and that is what makes them very special. Seeing teammates lose their control to the point where they are willing to fight each other instead of concentrating on their opponent.

Here are some examples of when teammates turn enemies.

It would be almost impossible to put one of these lists together and not have a Balotelli moment. Manchester City was losing 3-1 at home against Sunderland when Balotelli and Kolarov had an argument over who should take the freekick. It took Kompany to intervene to put a stop to what could have ended up being an ugly scene.

Maybe during a derby match, tensions run even higher, at least that is the logic explanation for Grobbelaar losing his mind and grabbing a 19 year old Mcmanaman by his neck after a bad clearance leads to an Everton goal, which gave them the 1-0 lead at Anfield.

During the 2014 World Cup, Cameroon players Benoit Assou-Ekkoto and Benjamin Moukandjo lost control and instead of concentrating on defeating Croatia they turned on each other. Sure the match was probably already lost, with Croatia leading 4-0 at the time, but Assou-Ekkoto completely lost his mind when he tried to head-butt his teammate.

This is by far the worst teammate fight I have ever seen. It was well known that the two of them didn’t see eye to eye, so it wasn’t a surprise that these two would end up going at each other on the field during a game, but when it happened it was still shocking and entertaining. The game was lost, so the weight of defeat must have played a role in their brawl, whatever it was the reasons and causes, the incident was a real embarrassment to the players and the team.
SHARE SHARE SHARE