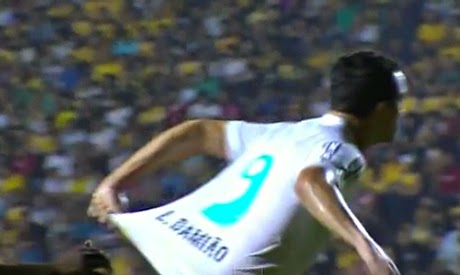 We have all witnessed players simulating a foul to earn a penalty or even to see the opponent carded. Some players have become almost experts at it, and they do it so well that it takes several camera angles to determine if indeed it was a dive or a foul.

Leandro Damião is not one of those players. The Santos striker has taken diving to a whole new level by pulling his own shirt during a 3-0 loss to Criciuma, in an attempt to fool the referee.

Nobody was fooled by his antics and the only one looking like a fool now is Leandro Damião that was caught by Brazilian TV doing this shameful ploy to earn a foul for his team. It is hard to find words to describe what he did, so why not just watch the video and judge for yourself.