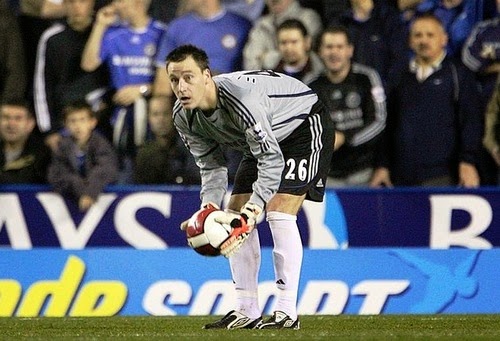 October 14th marked the 8th year anniversary of the day when Chelsea center-back and captain John Terry stepped in to help his squad in a manner even he could never imagine possible.

In a league match against Reading at the Madjeski Stadiumin 2006, Chelsea FC faced an early substitution of star keeper Petr Cech. Just 20 seconds in Cech dove at the feet of Reading's Stephen Hunt to make a save. The collision was hard and the Czech goalkeeper fractured his skull as a result.

Replaced by substitute keeper Carlo Cudicini, Chelsea went on to control the majority of the match and although Cudicini was tested a few times during the affair the visitors would go on to take a 1-0 lead.

But with just moments to go in the match and with both teams having used all of their three substitutions, another collision occurred inside the Chelsea penalty area. This time it was Cudicini colliding with Reading's Ibrahima Sonko, losing consciousness as a result.

With no replacements left to make, the captain took it upon himself to lead the team, this time from even further in the back than usual. Putting on the grey goalkeeper shirt Terry saw off the last few seconds of the match in goal.

This rare player filling-in for a goalkeeper occurance was by no means one of the impressive ones. Nonetheless, an event that rarely happens on the football pitch around the world was front and center in the English media the next morning. An event that will never be forgotten by the Chelsea faithful and surely John Terry himself.