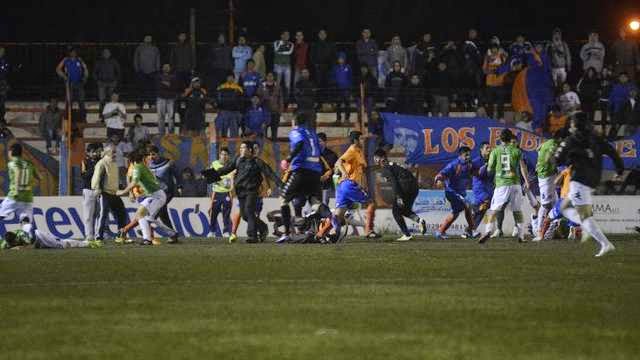 This week we have seen a bit of everything in football, even drone’s flying over stadiums, Euro qualification match being stopped due to a brawl, Balotelli being critical of his formal national team coach, well maybe that one was not as surprising as the others.

But continuing in the spirit of the Serbia vs Albania match, where the game had to be suspended due to a drone flying over the stadium and the ensued brawl between the players and fans, this video comes to you from Argentina. A game between Deportivo Roca and Cipolletti of the third division had to be suspended due to a massive brawl between players of both teams that ended with 12 players seeing a red card.

This time no flags or drones were involved but a huge lack of common sense and chivalry took over and the result was the game being abandoned in the 2nd half and 12 players being ejected.

It all started with a harmless foul but it soon broke out to a full on brawl that included players of both benches. The referee could barely contain the players and had no choice but to red card 12 of them which forced the game to be suspended, like the fight itself wasn’t enough for any person with common sense to call it a day and send everyone home.

As you can see from the video below, everything goes with the exception of the kitchen sink.