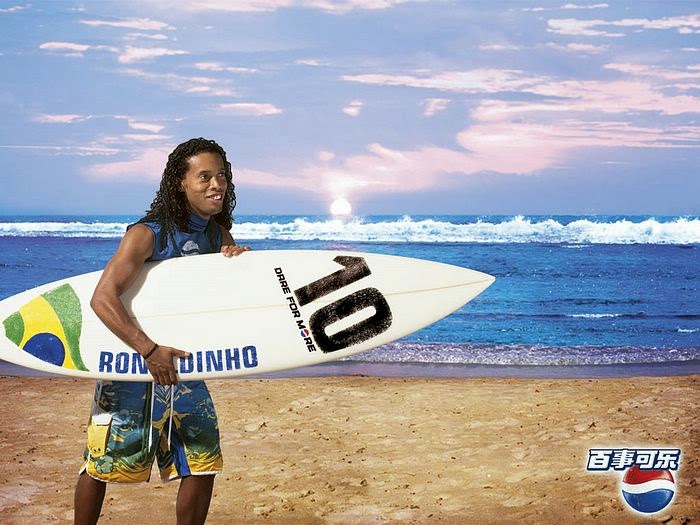 Here at FootyFair we don't really care if you drink Coke, Pepsi or olive oil. Nonetheless, over the years, the "suits" and "creatives" in Pepsi's marketing department and their ad agencies have come up with some great ways to incorporate huge football stars into their sometimes funny, sometimes cheesy, but never dull Pepsi football ads. We take a look at the top 10 "classic" Pepsi Football ads.

That's right, apparently this one was banned but we still include it in our list. We are guessing that it was banned because of "racial insensitivity", or maybe because the creators realized that nobody would believe that Roberto Carlos flew all the way to Asia so he could play against a whole squad by himself.

This is one of the "play for Pepsi" themed ads, where David Beckham and his group of superstars have to play a crew of Lederhosen wearing gentlemen in order to win their drink. Take note, they actually lose not because of the crazy CGI moves of the Germans, but because Roberto Carlos is trying to pick up the waitress.

Kids at a metro station turn themselves into alter egos and play for the remaining 3 Pepsi cans. And there's also the part where Thiery Henry is really into Cesc Fàbregas.

Henry, Drogba and others play against kids in Africa, on a pitch where the lines are made out of a crowd of spectators. Was Jorge Campos the shirt designer for this one?

Beckham, Raúl, Ronaldinho and Roberto Carlos play some beach footy, when a crew of surfers comes up to them and show them a sign that says "só para surfistas" which translates from Portuguese as "just for surfers" and then take their ball and kick it to the water. Instead of kicking their ass however, Beckham and his buddies take their surfboards and play the first ever known to mankind match of surf-football.

David Beckham as a cowboy is a bit of a stretch, but the "Wanted" sign for Rivaldo is a great little detail.

In this one we see a group knights who take over a village because obviously the villagers have cans of Pepsi stashed everywhere. But Beckham and his crew Totti, Ronaldhino, Roberto Carlos and Alexander the Great...sorry Fernando Torres, would have none of it. So like any dispute during the Medieval times, this one would be settled with a football match.

Who doesn't love to see a Sumo wrestler pull of a bicycle-kick. What makes this one even greater is the montage of celebrations at the end.

There is something odd about seeing world football stars having no arms and being attached to a rod. This ad however, is clever and funny.

This is a classic, and a favorite all over the world. If you haven't seen it you are either very young, live in a cave or haven't heard of this phenomenon called Internet (which means you're probably not reading this either), but in any case we don't want to spoil the amazing twist, so just watch and enjoy.