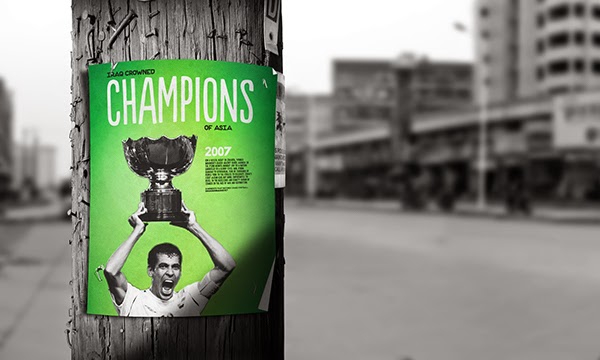 Jenny Grossbard is a Creative Strategist based in Doha, Qatar. In this project for shakomako.net she created 10 posters, each representing a defining moment in the history of Iraqi football. Below is the art and description of the project and posters according to Jenny.

In this poster series, shakomako.net wanted to pay homage to some of the most defining moments that have shaped Iraqi football. Regardless of where you grew up, which generation you’re from, or whether you’re even Iraqi or not, you most likely have a favorite Iraqi football moment.

Millions of fans spent many years watching games over choppy internet and TV connections, or not watching the games at all, only hearing news of the results afterward. To them, and most importantly to the players, we dedicate this piece of work.

The posters are meant to be printed, pasted on walls, for all to see. Send us images of these posters in your home, office, or on the streets. We want to share them with the rest of the world. 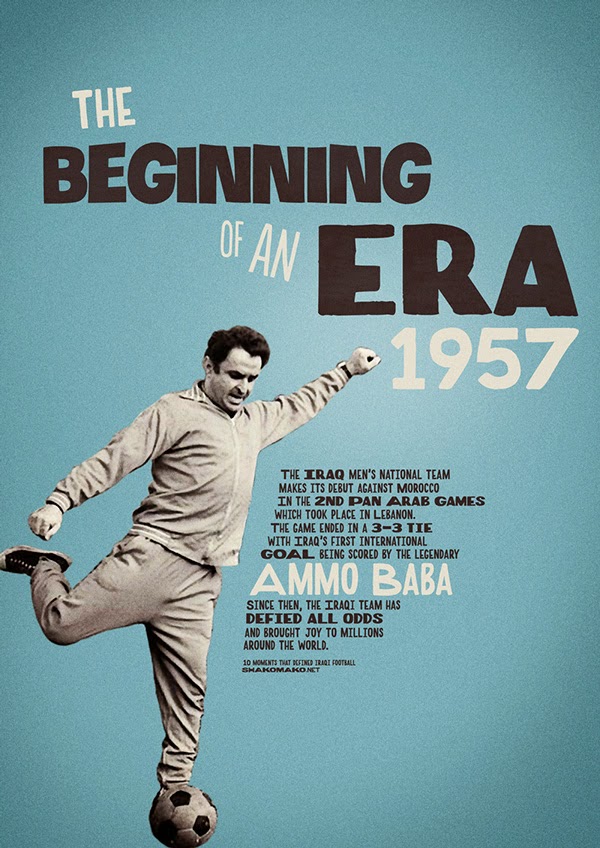 The Iraq men’s national team makes its debut against Morocco in the 2nd Pan Arab Games which took place in Lebanon. The game ended in a 3-3 tie with Iraq’s first international goal being scored by the legendary Ammo Baba. Since then, the Iraqi team has defied all odds and brought joy to millions around the world. 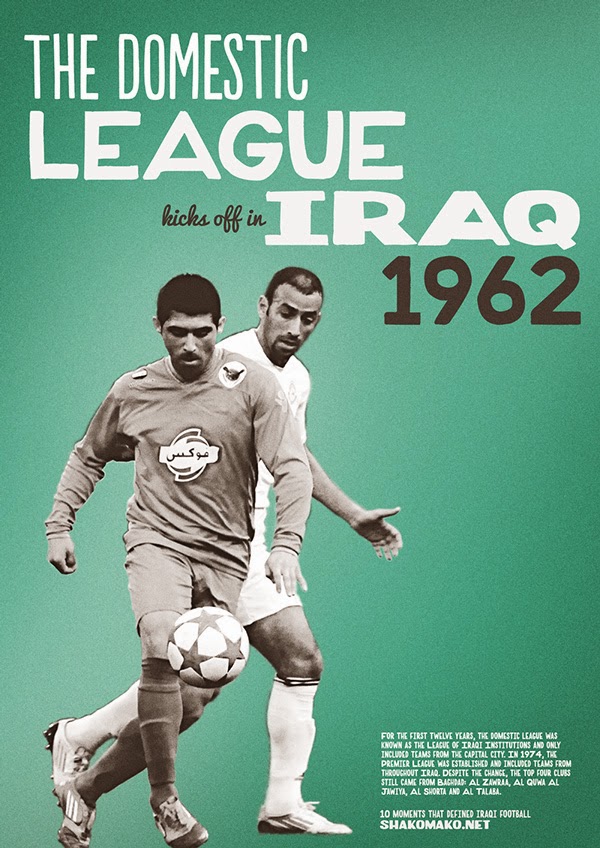 The Domestic League Kicks off in Iraq – 1962

For the first twelve years, the domestic league was known as The League of Iraqi Institutions and only included teams from the capital city. In 1974, the Premier League was established and included teams from throughout Iraq. Despite the change, the top four clubs still came from Baghdad: Al Zawraa, Al Quwa Al Jawiya, Al Shorta and Al Talaba. 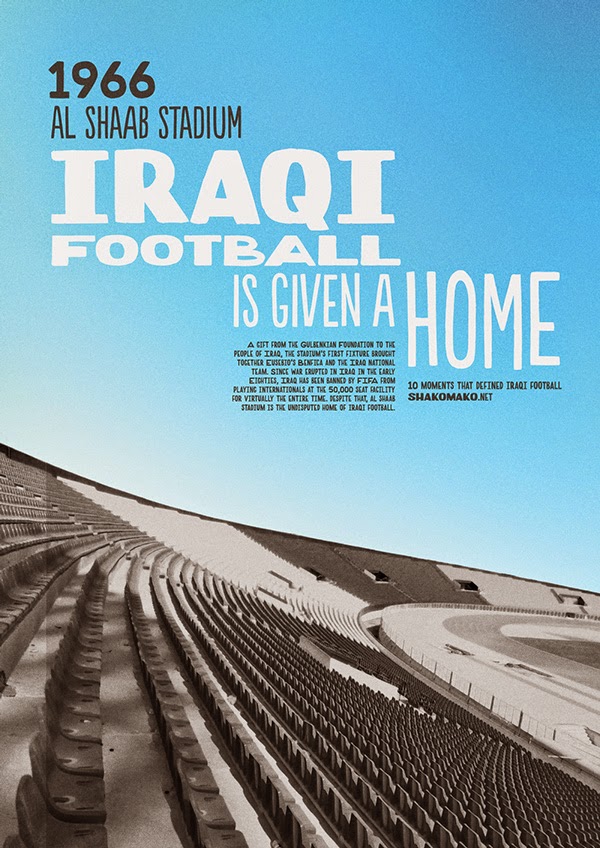 A gift from the Gulbenkian Foundation to the people of Iraq, the stadium’s first fixture, called Al Shaab Stadium, brought together Eusebio’s Benefica and the Iraq National Team. Since war erupted in Iraq in the early eighties, Iraq has been banned by FIFA from playing internationals at the 50,000 seat facility for virtually the entire time. Despite that, Al Shaab Stadium is the undisputed home of Iraqi football. 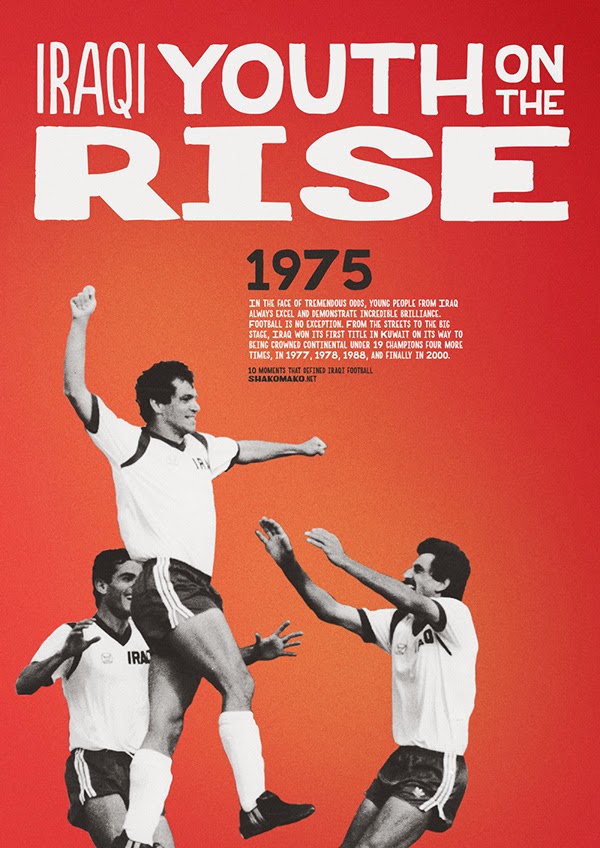 In the face of tremendous odds, young people from Iraq always excel and demonstrate incredible brilliance. From the streets to the big stage, Iraq won its first title in Kuwait on its way to being crowned continental Under 19 champions four more times, in 1977, 1978, 1988, and finally in 2000. 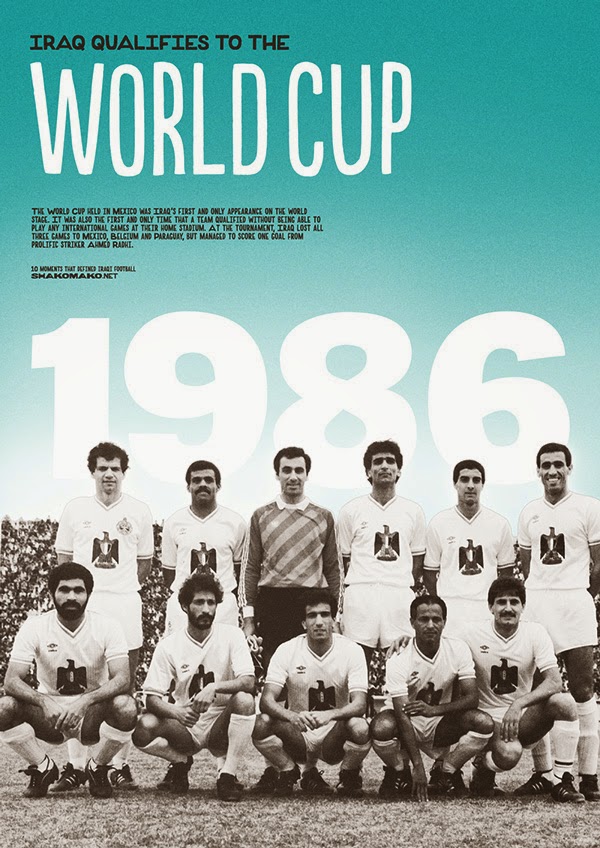 The World Cup held in Mexico was Iraq’s first and only appearance on the world stage. It was also the first and only time that a team qualified without being able to play any international games at their home stadium. At the tournament, Iraq lost all three games to Mexico, Belgium and Paraguay, but managed to score one goal from prolific striker, Ahmed Radhi. 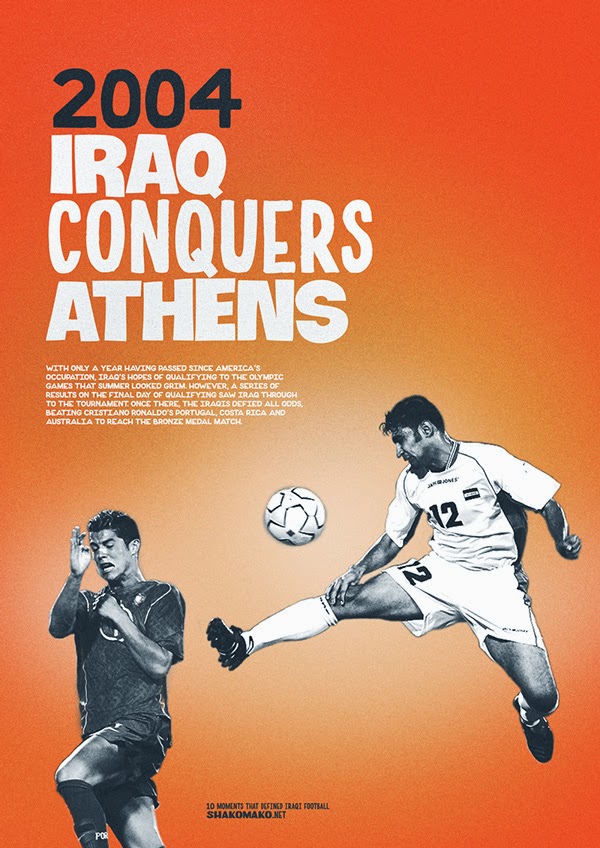 With only a year having passed since America’s occupation, Iraq’s hopes of qualifying to the Olympic Games that summer looked grim. However, a series of results on the final day of qualifying saw Iraq through to the tournament. Once there, the Iraqis defied all odds, beating Christiano Ronaldo’s Portugal, Costa Rica and Australia, to reach the Bronze Medal match. 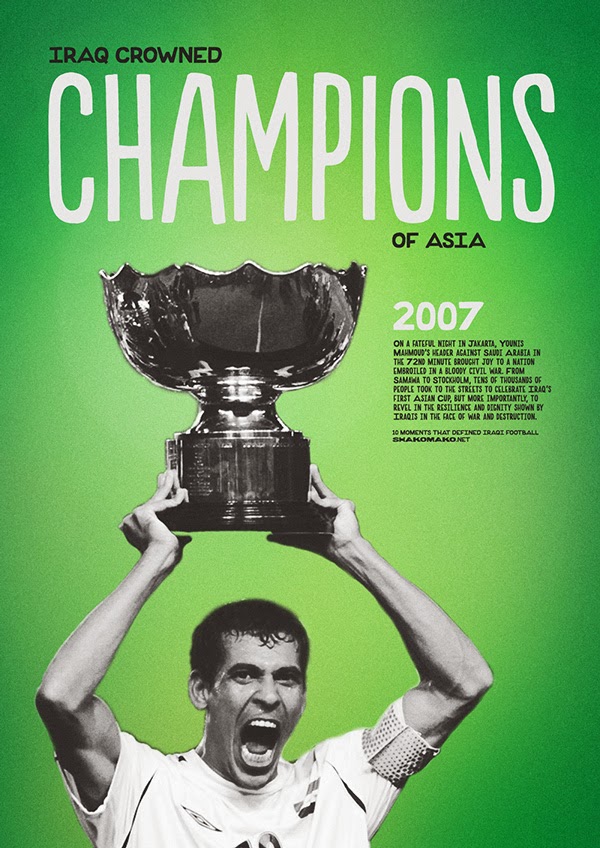 On a fateful night in Jakarta, Younis Mahmoud’s header against Saudi Arabia in the 72nd minute brought joy to a nation embroiled in a bloody civil war. From Samawa to Stockholm, tens of thousands of people took to the streets to celebrate Iraq’s first Asian Cup, but more importantly, to revel in the resilience and dignity shown by Iraqis in the face of war and destruction. 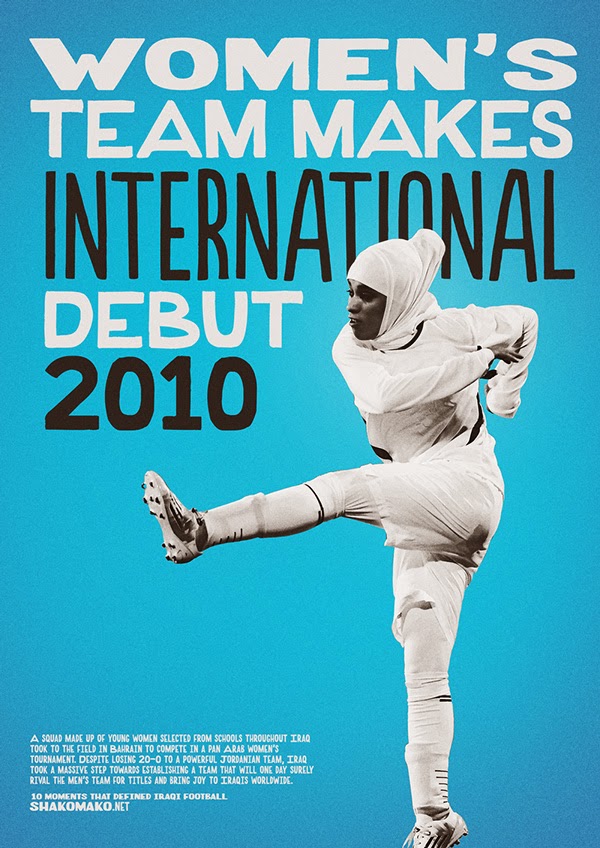 A squad made up of young women from schools throughout Iraq took to the field in Bahrain to compete in a Pan Arab women’s tournament. Despite losing 20-0 to a powerful Jordanian team, Iraq took a massive step towards establishing a team that will one day surely rival the men’s team for titles and bring joy to Iraqis worldwide. 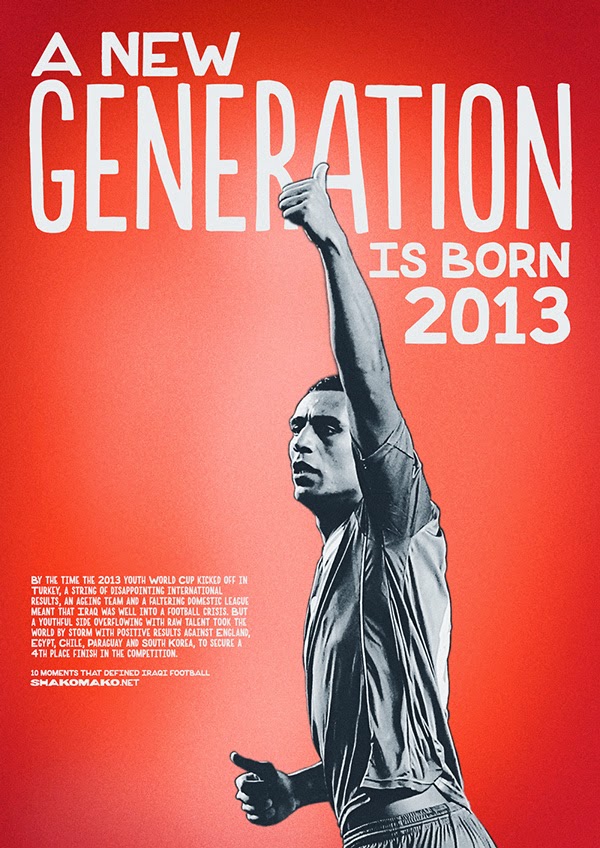 By the time the 2013 Youth World Cup kicked off in Turkey, a string of disappointing international results, an ageing team and a faltering domestic league meant that Iraq was well into a football crisis. But a youthful side overflowing with raw talent took the world by storm with positive results against England, Egypt, Chile, Paraguay and South Korea, securing a 4th place finish in the competition. 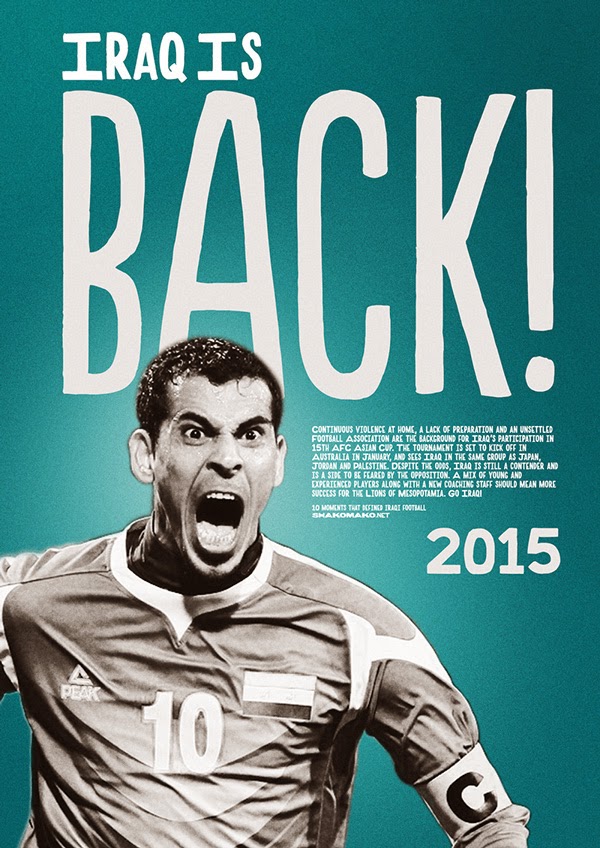 Continuous violence at home, a lack of preparation and an unsettled football association are the background for Iraq’s participation in the 15th Asian Cup. The tournament is set to kick off in Australia in January, and sees Iraq in the same group as Japan, Jordan and Palestine. Despite the odds, Iraq is still a contender and a side to be feared by the opposition. A mix of young and experienced players along with a new coaching staff should mean more success for the Lions of Mesopotamia. Go Iraq!
SHARE SHARE SHARE