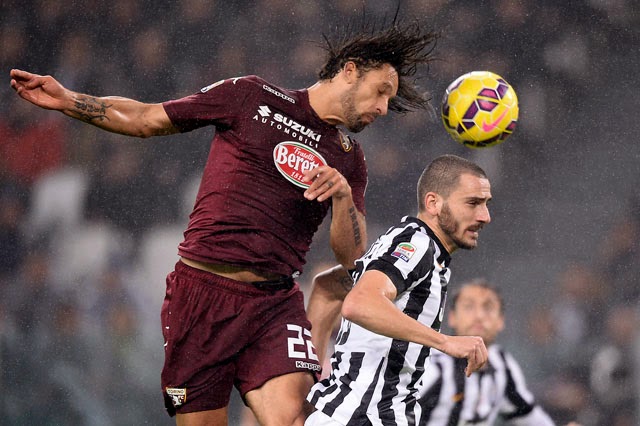 I must admit that when it comes to Serie A football, I personally am as intrigued by it as by any other league I follow less than often. Of course, as a true football man I keep an eye on the action knowing that it is indeed one of the better leagues in the entire world. So when I sat down to watch the Turin derby this past weekend I knew that more likely than not I was in for a treat.

I wasn't wrong, that's for sure. A rivalry that doesn't get played every season due to Torino's bouncing around between relegation and promotion back to the top tier, the Derby della Mole is intense every time nonetheless and this season's first meeting between the two was no different.

Not surprisingly home side and Serie A leaders Juventus enjoyed the majority of possession and looked deservedly the better team on the pitch. But once the final whistle blew I couldn't help but feel that Torino deserved at least a draw in this match; a match that was won by the otherwise mediocre on the day Andrea Pirlo with what was practically the last shot of the match.

The passion and intensity both clubs played with however was really the highlight of the weekend for me personally. A true derby dynamic both on the field and in the stands; the derby buzz was apparent to those watching on TV, and I can only imagine the electric atmosphere experienced by those who were lucky enough to be in the city, or even better, in the stands.

The Bianconeri went ahead after just 15 minutes, at which point I was sure Torino would not be able to get a hold of the match. But the Granata did not give up. Just 7 minutes after Juve went 1-0 up, Torino managed to do what they could not achieve since for over 12 years when they last scored against Juventus. Aside from braking their terrible scoring record against city rivals Juventus, Torino not only scored, but managed to secure what will likely be one of the best goals of the year thanks to Bruno Peres' incredible individual effort to put his team level. The Brazilian full-back took the ball deep in his own end and dashed to the right wing. With a burst of speed he left Juventus players "in the dust"so to speak, right before slotting the ball into Juve's net from just inside the box. (see goal highlight below)

The celebration said it all. It was a moment that was very dear and important for the supporters of a team who had not scored against their bitter rivals since February of 2002.

It was two former Juventus footballers who nearly gave Torino a 2-1 lead just after the restart when Amauri and Quagliarella combined, just for Quagliarella to put the ball on the wrong side of the bar.

Juventus would have the very last laugh however, as none other than Andrea Pirlo would slot in a scorcher with no time left on the clock. The stadium erupted in a fashion that would be acceptable for a championship winning goal. That's how important derbies are for football fans. (Pirlo's goal below)

I sat satisfied after the final whistle. Not because I prefer Juve to Torino and perhaps not even because the football was the best quality I have ever seen. I was happy because I watched two clubs who understand the importance of an otherwise not so important middle of the season match between league leaders and a club that is mediocre at best (at least in the standings); a match that would otherwise go under the radar to fans outside of Italy if it were not a local rivalry.