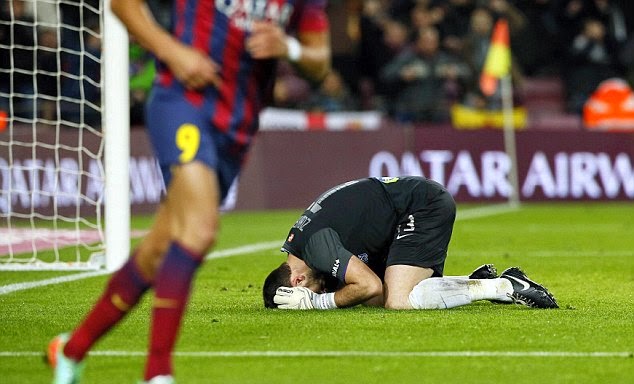 As 2014 comes to a close we could give you a list of the best footballers of this past year, or perhaps a montage of 2014's best goals. Instead, in true FootyFair fashion we will instead entertain our fans with one of the most embarrassing aspect of playing football, the own goal. Here are our top 5 "balls in the back of your own net" moments of this year.

Earlier in the year (EPL's 2013-14 season) we saw Liverpool center-back try to clear the ball from a rather weak Fulham cross into the box. The result was odd.

Perhaps it's not a horrible own-goal and Brazilian defender Marcelo had very little options but to put the ball into his own net as he saw the Brazuca very late as it hit his leg. However, His own goal marked the first goal of the 2014 FIFA World Cup that was coincidentally hosted in Brazil, with Brazil probably being the favorite to win the entire tournament. If you watched the match live you know exactly how shocking a beggining this was to the tournament.

As if the eventual 8-0 loss at the hands of Southampton was not enough for Sunderland this past October, on loan Argentinian defender Santiago Vergini produced one very impressive own-goal to add to his side's struggles on the day.

In early 2014 in the first leg of the Copa Del Rey semi-final between Barcelona and Real Sociedad, the visitors from Basque Country would prove that even Barcelona sometimes gets lucky, as the away team would produce a bizzare own goal around the 60th minute mark to give the home side a 2-0 victory. While the goal was officially registered as an own goal by Sociedad's goalkeeper Eñaut Zubikarai, it's pretty clear to see that the shot stopper had very little with the insane incident.

By far the most epic of all own goals on the year was that of German international and Borussia Mönchengladbach midfielder Christopher Kramer against Borussia Dortmund. A moment of both brilliance and madness all roled into one goal as Kramer so simply put the ball in the back of his own net from nearly the half-way line.