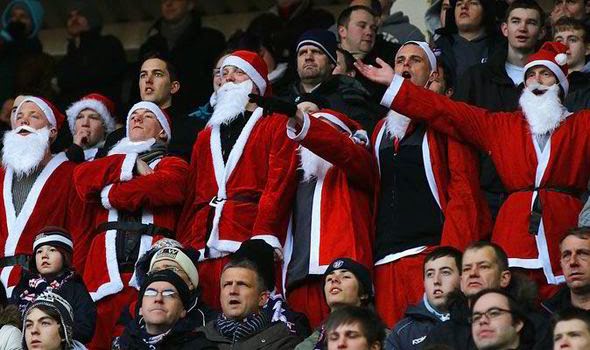 The holiday season is always an incredible time of the year for the Premier League fans, with plenty of fixtures to watch, emotion and drama is never too far behind.


Chelsea was hosting Aston Villa at Stamford Bridge and looking for the three points, but the Villains had other plans. Shaun Maloney volleyed home a close range shot and then followed that up with a shot from outside the box that made it pass Petr Cech’s arm for a 2-0 lead. Shevchenko got Chelsea back in the game with 2 goals, the first from the penalty spot and the second from mid-range. Chelsea’s defender, Alex, gave the Blues a 3-2 lead, but Villa responded back through Martin Laursen. Ballack scored the go ahead goal for Chelsea with 2 minutes left on the clock, but it wasn’t meant to be, Gareth Barry with a great free kick ended up tying the game at 4’s.


Aston Villa seems to have a special relationship with Boxing Day matches and incredible comebacks. A year after their match with Chelsea, they were involved in another epic holiday battle, but this time with a different London side, Arsenal. Arsenal went ahead first with a Denilson goal in the 40th minute. Only four minutes after the restart, Abou Diaby put his team ahead by two goals and it looked like Arsenal would be cruising to victory. Villa had other ideas, and just like they had done the year before, Aston Villa would not give up on the game. Villa reduced in the 65th minute by Gareth Barry from the penalty spot. Zat Knight became the unlikely hero when he tied the game deep into injury time, for another wild Boxing Day comeback victory.

This was another thrilling Boxing Day match. Nicky Butt handed United an early lead but United defender, Gary Neville, gave that goal back to Everton by scoring an own goal. Kleberson scored the go ahead goal shortly after the start of the second half and David Bellion added to that lead with a goal of his own. Duncan Ferguson got one back for Everton but it wasn’t enough to snag the victory away from United.


No other team has had more classic Boxing Day matches than United. Boxing Day 2012 their opponents were Newcastle United in a seven goal affair. James Perch scored first for Newcastle only four minutes after the start of the game, but 21 minutes later Evans scored the equalizer. Evans wasn’t done scoring, he would put one on the back of his own net giving the lead right back to Newcastle. Patrice Evra scored a low shot past Tim Krul to level the game once again. Newcastle was not willing to give this one up easily, and Papiss Cisse scored a well-placed left foot shot past David De Gea to give Newscatle the lead for the third time in the game. Van Persie found the net and scored the equalizer with 20 minutes before the end of the game, but United wasn’t done and Javier Hernandez scored the winner sending Old Trafford into jubilation.


David Hirst, Mark Bright and John Sheridan scored a goal each to give Sheffield a 3-0 lead in this Boxing Day classic. United didn’t gave up on this match that seemed all but lost, and pulled back with a second half performance that makes this game an instant classic. Eric Cantona scored the tying goal in this game, in route to another title win.
SHARE SHARE SHARE