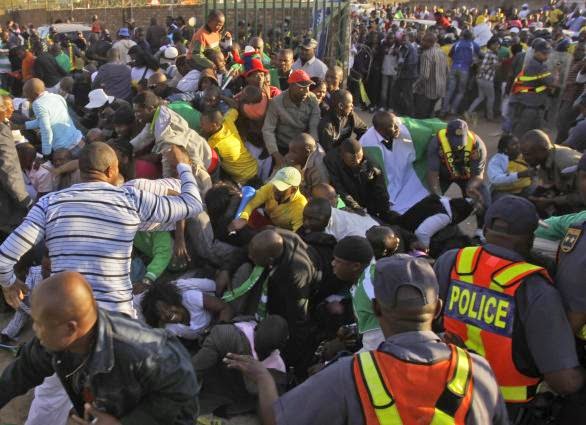 Black Friday shopping stampedes is a phenomenon I will likely never understand to the fullest. Hundreds, sometimes thousands of people fighting over what may or may not be "great deals" on electronics and other retail products is not something I can see myself participating in at any point in my life. Football however, I can relate to. And perhaps I can even relate to both the good and the bad, so with Black Friday in mind, I list some (not nearly all) of the innocent, bizarre, shocking and tragic stampedes in football.

Editor's note: This is not a list of football's worst tragedies, and I would hate to offend anyone by excluding some of the more heartbreaking and devastating events in football history such as the Ghana disaster at the Accra Sport Stadium, the Guatemala Disaster or the events at Ibrox. This is simply some events that were the first to pop into my head and ones I could find videos for.

When David Beckham visited a Chinese University in 2013, over 1000 fans gathered to see the English football icon. But the event was not as choreographed as a Chinese holiday parade routine as the majority of fans rushing to get closer to the star, in turn injuring about 7 people in the stampede.

Not every Chilean fan turned around and went to watch the Chile vs. Spain match in this summer's World Cup at a local bar after being told the venue has been sold out. Instead. about 100 Chile fans broke through a checkpoint and stormed into the Maracana stadium in Rio de Janeiro creating chaos for the stadium's security team.

Many stadium tragedies have been due to overcrowding. But while in many parts of the world stadiums have never had such experience, for South Africa the Ellis park disaster came 10 years after another unfortunate football incident known as the Orkney disaster which saw 42 people die during a pre-season match. At Ellis park in 2001, it is said that there were 30,000 EXTRA tickets sold to a venue that could hold 60,000. With capacity at 150% the result was devastating as 43 spectators lost their lives due to the stampede.

Egypt is known around the world for its fierce football rivalries and violent clashes between rival supporters. But in 2012 the ugliest side of Egyptian football violence showed its face after home-side Al Masry fans attacked visiting Al-Ahly fans, player and staff even though Al Masry won the match 3-1. The result of the violent stampede which used knives, bats and other weapons was devastating. Over 1000 injuries and 79 deaths were recorded as a result of these events.

While not officially the most tragic event in football as far as death toll is concerned, the Hillsborough disaster is perhaps the most storied and the one that is talked about more than any other. On April 15th, 1989 during a match between Liverpool and Nottingham Forest 96 fans died after too many supporters were let into the Hillsborough Stadium in Sheffield for this FA Cup semi-final match-up. The Hillsborough disaster marks to this day one of the saddest, most tragic and most devastating days in English football.