FFN: Sepp Blatter to be Confirmed as FIFA President for Life 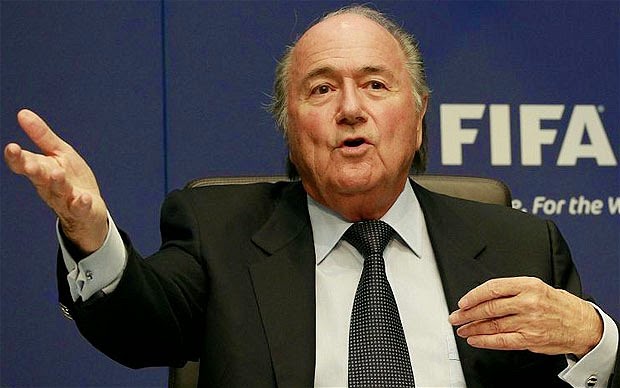 FIFA has had a few controversial days in recent years, and Thursday, November 13, 2014 is right up there with the best of them.
Coming on the heels of another stormy day for the scandal plagued world football governing body, after the probe in wrong doing over the awarding of the 2018 and 2022 World Cups, FIFA President Sepp Blatter released the following statement:

"Dear FIFA Family, football fans and members of the media:

With the results of the investigation into any potential irregularities over the bidding for, and subsequent awarding of, the 2018 World Cup in Russia and the 2022 World Cup in Qatar being released yesterday, I am confident that we can now turn the page on this unseemly matter.

Friends, FIFA has investigated itself and found itself innocent of all charges. We know what we have always known, in that FIFA is committed to the greater good. I repeat: The Greater Good.

Everything we do is to grow the sport of football around the world and any profits that come from that are purely coincidental.

There are no nations as honest, progressive, tolerant and yet to committed to peace and democracy than Russia and Qatar. It's an insult to the people of both nations to suggest that there has been any wrong doing on their parts.

Yes, questions have been raised about Russia losing all of their data related to the World Cup 2018 bid, but computers and data storage aren't fool proof. Accidents can happen. We once had a University student on work experience mistakenly shred 57 boxes of receipts and accidentally format a few hard drives at FIFA Head Quarters. These things can occur from time to time.

As for Qatar's questionable treatment of foreign workers, from my five star hotel room window on a recent trip there I couldn't see anything amiss. I believe it's just a case of racism on the part of the British media.

People have raised the very valid question about it being too hot to play the World Cup in the Qatar in the summer, and although it doesn't appear to be ideal, teams still have seven and half years to begin acclimatizing to the conditions. Our friends in Qatar have offered to host friendlies featuring all of the best nations in world football every July from next year until right up to the 2022 World Cup.

Moving onto other matters, as I foresee even more challenges in the coming years that will require not only a firm hand, but continuity in leadership, I have taken the step of suspending the FIFA Charter for the time being and electing myself The Right Honourable FIFA President for Life.

Under my leadership we will continue to seek out bold new ideas for the game, maintain the integrity that FIFA is famous for, and protect ourselves against subversive enemies like the FBI.

During the next two decades under my stewardship, here are a few of the exciting developments you should be looking forward to:

Football in Space - In partnership with RedBull, we plan to hold a friendly between Brazil and Portugal on the moon.

Sexy Football - Mandatory beach volleyball style uniforms from Lululemon for all nations participating in the Women's World Cup. This will help promote a more female aesthetic.

World Cup Expansion - The ADIDAS MasterCard FIFA World Cup by Coca Cola will be expanded to 64 nations and will take place every two years. Starting with North Korea in 2024, moving onto Saudi Arabia in 2026, Sudan in 2028, and then sweeping into Uzbekistan in 2030 the future of the greatest tournament on earth will only be enhanced by this move.

Banning Tackling - To prevent injuries and encourage more goal scoring opportunities possession will only change hands if a team intercepts a pass or a player misses a shot on target. Tackling doesn't add any value to football and will therefore be banned outright.

Thank you for your time and HEIL FIFA!

To read other editions of Friday Fake News - CLICK HERE