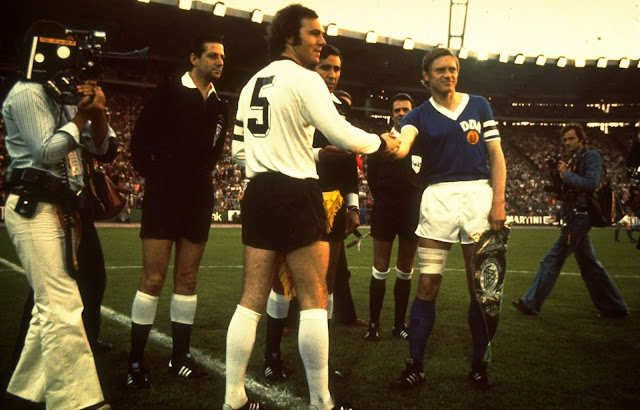 This past weekend marked the twenty five anniversary of the Fall of the Berlin Wall, which directly led to the full reunification of Germany just over a year later.

During the partition of the country into West Germany and the German Democratic Republic (GDR), also known as East Germany, both fielded international sides.

They did however win Olympic gold in Montreal in 1976, and rather infamously defeated West Germany 1-0 in a group match during the 1974 World Cup. In the only ever meeting between the two nations, Jurgen Sparwasser settled a politically charged encounter in Hamburg in the 77th minute.

Franz Beckenbauer and West Germany would of course have the last laugh in that tournament, as they picked themselves up after this shock defeat and went on to win the World Cup.

The East German's would meanwhile crash out of a very tough second group phase, where they found themselves against Brazil, Argentina and Netherlands, and would never play in another finals tournament.

East Germany played the final match of their international existence on September 12, 1990. They won their last encounter as a nation 2-0 over Belgium in a friendly with both goals coming from Matthias Sammer.


If that name sounds familiar to you, it should as Sammer would later help lead a unified Germany to victory in Euro 96, later being named player of the tournament, and follow that up with helping his club side, Borussia Dortmund to a UEFA Champions League title just under a year later.

Although Sammer, would go on to make 53 appearances for Germany, to go along with his 23 appearances for East Germany, and would become the most successful player to come out of the former GDR, he's by no means the only one who played for both sides.

The following are seven other players who represented both East Germany and a unified Germany.