Boca Juniors Agustin Orion Hit in the Head with a Rock 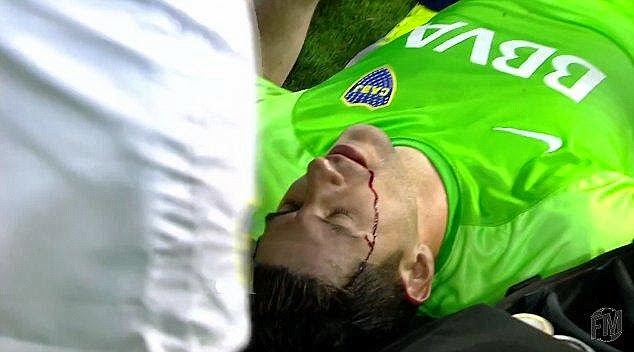 Another player has been hit by an object being thrown from the stands, this time it was Boca Juniors goalkeeper Agustin Orion during a match against Rosario Central.

A few weeks ago a Cameroonian player, Albert Ebossé, was killed during a match when an object thrown from the stands hit him in the head. The 24 year old player was playing for JS Kabylie against USM Alger in the Algerian league when the incident happened. You almost hoped while unfortunate that this would be an isolated incident and those fans attending games had more respect for the players on the field. Some perhaps brushed it off as something that only happens in under developed countries and not in well-known leagues or in matches between well-known teams.

Well, it has happened again and this time in Argentina, and between two of Argentina’s most well-known clubs. In a game between Boca Juniors and Rosario Central, goalkeeper Agustin Orion was hit in the head by a rock thrown by fans of Rosario Central. The goalkeeper would need medical attention on the field to stop the bleeding from his head but was able to continue the match.

The damage caused by the rock was not severe but could have been, and until local authorities and match officials take a heavy stand against this sort of behavior we will continue to see incidents like these happen and sometimes with more serious consequences. If clubs can’t control their fans and educate them on what behavior are expected from them, then leagues and officials should punish the clubs severely when these incidents take place. Instead there is a sense of brushing it off as just an incident caused by a drunken fan, no big deal; well it is a big deal. A player died in Algeria, how many more will have to die before this is looked at as a serious problem?

So far there has been only silence from Argentinian officials as far as any sort of punishment or consequences for Rosario Central for the behavior of their fans. I would be surprised if anything of note actually takes place. Some players are taking their lives in their own hands when they walk on the football field, it is the wild west out there.