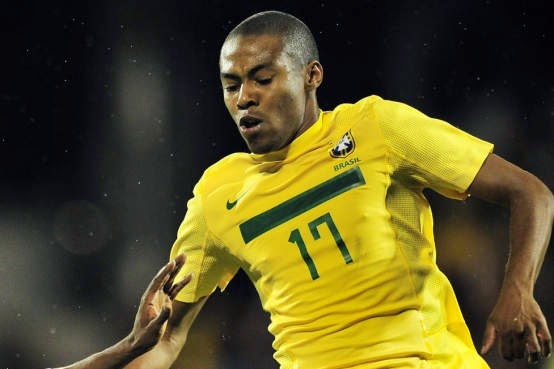 News reports indicate that the reason why Maicon was sent home from the Brazilian camp was due to a homosexual relationship between him and Elias.

Elias is clearly upset over the allegations that he is having a homosexual relationship with Maicon, which was clear in his declarations to the media today. “Whoever spoke ill of me will have to pay; I will be seeking legal action. I was surprised, but things have taken a dimension that will force us to act in a single way, if there was another option we would see a much different approach” said the Corinthians player.

“I am not against homosexuals. I am not a homophobe, I have many homosexual friends” commented Elias.

Nobody knows for sure why Maicon was sent home from the Brazilian national team camp, only Dunga could clarify that situation and explain what he did and why he did it. In the absence of that we are left with the claims that it was due to the fact that Maicon and Elias were having a homosexual relationship. Well, no player should be kicked out of his national team camp because of his sexual orientation. So regardless if the claim is true or not we should all be more appalled by the fact that a player could be discriminated based on his sexual orientation. The Brazilian media is not even bringing that up, they are too busy judging these two players in the court of public opinion.

The only person on trial should be Dunga, because if he is going to discriminate a player based on his sexual orientation he should be the one being criticized, and asked to step down. Instead the media has focused on these two players that will now have to explain themselves to family and friends.

To me the issue here is not whether these players are or not, but rather how a possible player who is would be treated by his coach and country, if he made it public to others. Elias and Maicon shouldn’t have to say more than confirming or denying the reports, in this case they have denied. That is all they should do, and once that is done all eyes should turn to Dunga, and ask him the real question that most civilized people are wondering. If a player on the team was a known homosexual would he still be called up to represent Brazil? To me that is the million dollar question and the one that the media should be asking, instead they are invading these players’ personal lives.

It is sad to see that these issues are still present in the world of sports, and how some people can be so cruel towards others, just because their sexual preference is different from theirs. Just like racism, homophobia is not going to go away any time soon.