The Round Table: Neymar, Messi and Suarez 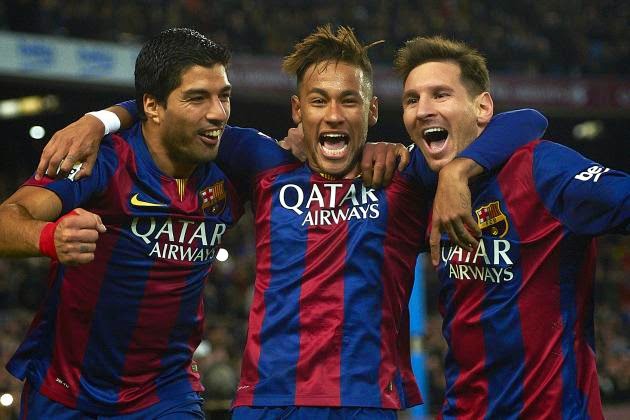 
Parmar:
Now? Not yet, but the more they play together and the more I see the three of them play together they could very well be on the road to that label. The major thing is Messi seems to be keeping Hannibal Lector (Suarez) in check on the field.

Bramble:
I'd probably have to say so... In all my years of watching footy i haven't' seen a trio that was that deadly. I could argue the rotation of Cole, Yorke and Ole (Who put the ball in the German's net) and Teddy (Ohhhhhh Teddy! Teddy!) was the best pairing but they rarely, if ever, were on 3 at a time. But these three are amazingly deadly.... Right now they're still figuring it out but occasionally you see what's going to come in the future and the future is scary if you aren't a Barca supporter.

Iain:
Rivaldo, Fat Ronaldo, and Ronaldinho have to be in the conversation.

Parmar:
Different dynamic. That Brazilian threesom had defined roles, while these three on Barca are just scary, as they are all similar players and swap roles. The opposition doesn't know who will be pulling the strings as the playmakers and who is your goal scorer.

Jay:
Club football or just in general on any team ever? Currently, I don't think any team has the same deadly talent. Real Madrid would probably be the closest with Bale, CR7 and Benzema. Still miles off with the first and latter in that three though in my opinion. As for Brazil.... that lineup was insane together. Arguably better and more consistent in their day.

Iain:
International or club trios are fair game for this discussion. "Friends of FIFA" World XI vs "Zidane and Family" bullshit friendlies are out though.

Jay:
Costa and Hazard may be up for discussion, but I can't think of another player with the same calibre and constant impact to fill the other attacking role (I consider Cesc to be a MF). United misses out because RvP and Falcao can't figure out how to play together and stay fit. RvP, Falcao and Rooney would be immense with the right tactics, but we have yet to see that.

Parmar:
If Oscar would get his head out of his ass I would be with you on that, Jay.

Iain:
Louis van Gaal would never start those three together at United. Rooney could play off of either of those two, but neither RVP or Falcao are that flexible.

Bramble:
I saw first hand how deadly 'true' Ronaldo, who some of you call 'fat', Rivaldo and Ronaldinho were as they tore England's defense asunder in World Cup 2002. Schooling us with one of the greatest counter attacking goals I've seen, and just general trashing of our defense. Definitely they should be in the conversation.