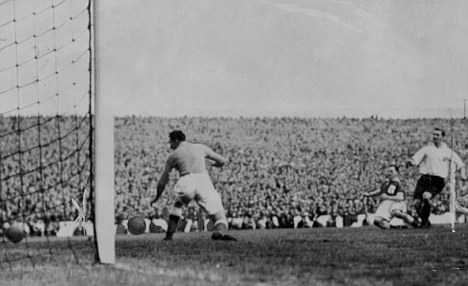 When Wales qualified this week for the European Championships next summer in France it was their first major tournament they had successfully made it to since 1958.

Although the nation mainly known for its great rugby side has produced some brilliant footballers over the years, like Ian Rush and Ryan Giggs, they have struggled mightily in qualifying for the Euros or the World Cup.

On this day in 1949, Wales played their first qualifying match for the FIFA World Cup when they took on England at Ninian Park in Cardiff.

Stan Mortenson, a star forward for Blackpool, notched England's first ever goal in a qualifier when he smashed in a 22 minute opener.

Then Newcastle legend Jackie Milburn put away a hat trick to ease the Three Lions towards an impressive away win, with the Welsh only managing a late consolation through Mal Griffiths.

With the British Home Championship being used as the qualifying tournament for the 1950 World Cup in Brazil, England and Scotland qualified by virtue of grabbing the top two spots before the Scots opted to skip the tournament in fit of pique as they believed that going to the World Cup as a qualifying runner up wouldn't be appropriate.

England may as well have skipped the competition themselves as they would famously lose to a United States side made up of mainly amateurs to cap a miserable tournament.
SHARE SHARE SHARE