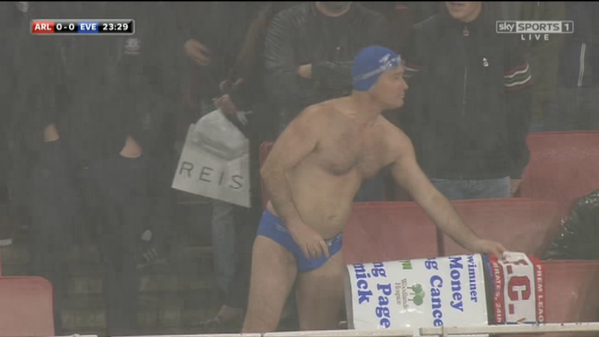 While Arsenal continued their winning ways on Saturday with a 2-1 victory at home over Everton, the narrative after the match wasn't about the Gunners grabbing a one point lead at the top of the table or Laurent Koscielny's eventual winner.

An Everton fan in a rather interesting outfit was the talk of the fans around him and the media, on account of him rolling up to the Emirates wearing a swimming cap and speedos.

Those of us bashful North Americans who gasp in horror at Europeans strutting around at resorts in the Caribbean with their meat and two veg flopping about for all to see would have at least expected football stadiums to be a sanctuary from budgie smugglers across the Atlantic, but this Everton fan proved that not to be the case.

But before we're too hard on the man who calls himself 'Speedomick', it should be mentioned that he's wearing this Michael Phelp's inspired number for a very worthy cause.

The scantily clan Toffees fan is sporting speedos in an attempt to raise money for cancer treatment and more specially the Woodlands Hospice. 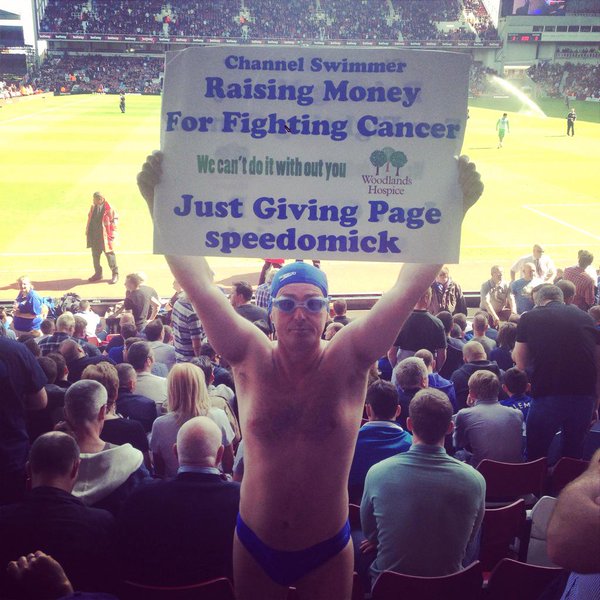 Speedomic, whose real name is Michael Cullen, completing the daunting task of swimming the English Channel to raise money for the Hospice a year ago and continues in his efforts to generate funds for those suffering with cancer.