A Quick Recap of the Euro 2016 Playoff Matchups 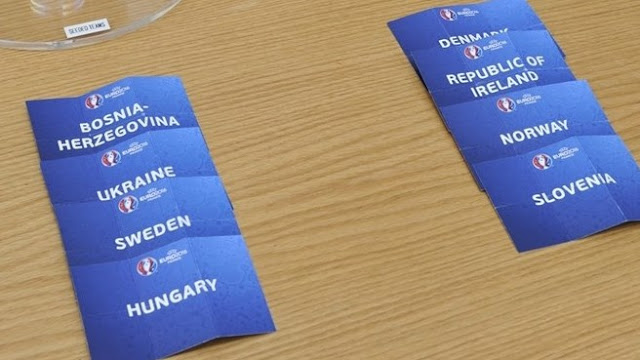 Eight more matches and football fans in Europe and around the world will know the identity of all twenty-four teams that have assured their spots in France next summer. Four matchups remain in the qualifying stages in the playoff edition of the competition and four of the eight teams will join the twenty that have already guaranteed their spots in the 2016 European Championships.


Here is a quick recap of the draw that took place this morning in Switzerland.

Ukraine and Slovenia have met on four occasions previously with the Ukrainians never winning a single match. But the two previous draws and two Slovenia wins may not be as telling as one may think. Currently, Ukraine's national team sits sixteen spots higher in the FIFA rankings and are widely believed to have a stronger team. If the Slovenians manage to get past the Ukrainians, next summer's tournament will mark sixteen years since their last (and only as an independent nation) participation in the Euros. Ukraine hosted the last Euro tournament in 2012, but neither last tournament's hosts, nor the Slovenians have made it past the group stages in their only Euro appearances.

Bosnia and Herzegovina vs Rep. of Ireland

Perhaps not the favorites in their group that included now world #1 ranked Belgium, Bosnia & Herzegovina was nonetheless seen as a strong contender for one of the two automatic qualifying spots. But with Wales' emergence and Bosnia's surprising losses to Cyprus and Israel, the squad was unable to get back into the top two positions and only managed to secure a playoff spot on the last day of matches. The Irish on the other hand enjoyed quite a few impressive results, including a draw and a win against world champions Germany, but were unable to fend off Poland from claiming the second place in the group ahead of them. The two have met just once before with Ireland coming out 1-0 on top.

Drawn into a group with Bulgaria, Croatia and Italy, Norway was never a favorite to go straight through to France 2016. But a playoff spot is a pretty good achievement for a team who's last major tournament participation was the 2000 Euros in Belgium & Netherlands. The Hungarians, while full of history and football tradition on the global scale have not made a major tournament since their participation in the 1986 World Cup in Mexico and will look to end what will be a 30 year drought from major competition. Head-to-head the two have met 17 times in the past and the record is pretty close. Hungary have won 7 of those previous meetings, Norway enjoyed 5 wins of their own and the remaining 5 were concluded in draws.

A highly anticipated matchup will see Sweden and Denmark play out yet another version of their Scandinavian rivalry which has been around for well over a century now. Denmark's win in the 1992 Euros which was hosted by the Swedes added fuel to the fire of this rivalry and there will be nothing more the two sets of fans would love more than to eliminate their rivals from next summer's European championships. The Swedes hold a slightly better record in their 103 meetings to date, but each meeting between the two takes on a new storyline and this one is sure to be a fiercely competed two-leg affair. Sweden has not missed a European championship tournament since they were unable to qualify for the competition in England in 1996, and a win over Denmark will mark their sixth straight Euro qualification.
SHARE SHARE SHARE