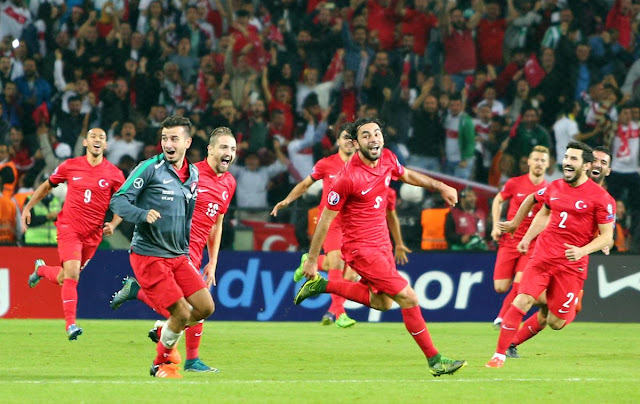 After missing out on the last three major tournaments, the Turkish national team was drawn into a 2016 Euro qualifying group that seemed challenging, but not impossible for the Turks to advance from. But a poor start to their campaign made it seem that the team which last participated in a major tournament in 2008 was all but out of qualifying contention to next year's European championships in France.


A 3-0 loss in Iceland and a 2-1 defeat at home to the Czechs saw Turkey sitting dead last in their group A after even the likes of Latvia and Kazakhstan were able to secure a point. They would go on to draw Latvia twice and with three matches to go in the group the Turks had just 9 points from a possible 21 and were facing an exit, sitting in fourth place behind Iceland, Czech Republic and the Netherlands.
On September 6th however, hope would peek it's head once more for Turkey as the home side defeated a struggling Dutch side in emphatic fashion, with a 3-0 final score. All of a sudden "the red and whites" were ahead of the Dutch and were facing the possibility of a third place finish and likely a playoff match-up for a chance at a ticket to the 2016 Euros.
The "Oranje" players were not worried about the Turk's resurgence and were sure that the team that had just defeated them would go on to drop points in their last two matches, both of which were against the top two teams in the group, Iceland and Czech Republic.
On October 10th Turkey went on to defeat the already qualified Czechs in Prague, while Holland narrowly escaped embarrassment with a 2-1 win in Kazakhstan; it all came down to the last game. While the Dutch were at home facing the Czechs, Turkey was hosting the group leaders, Iceland. Although the matches were being played at the same time, the Turkish footballers must have known that the only team that can catch them (the Netherlands) were trailing 2-0 at the half and even 3-0 at some point, while the Turks were 0-0 locked with Iceland, results that would regardless secure Turkey's playoff spot and a chance at France 2016.
But a miracle in the 89th would place Turkey even further than anyone expected. A goal from 30 year old Galatasaray midfielder Selçuk İnan, combined with Greece's 4-3 comeback win against Hungary in Piraeus, placed the Turks directly into next summer's competition as the best third place team in the qualifying rounds. The Turkish players were celebrating getting into the playoffs when one of the team members looked up the other result on his phone and the party became that of qualifying rather than one of having a chance to be in France next year.
See the moment Turkish footballers, staff and fans find out that their team has qualified directly to the 2016 Euros: