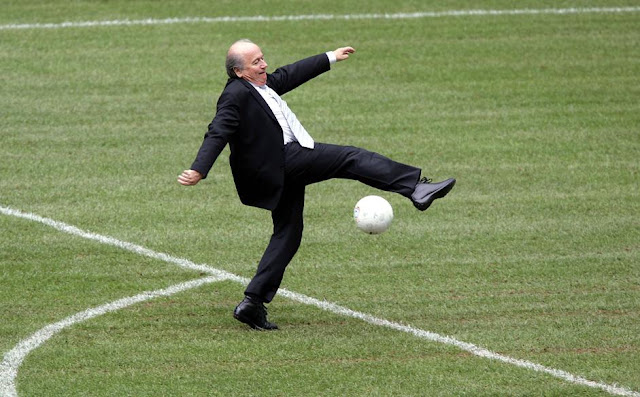 With the recent news of FIFA's major sponsors calling for Sepp Blatter's head, I thought we could take a look at some of the dumbest things the (most likely soon to be gone) FIFA President has ever said.

"Let the women play in more feminine clothes like they do in volleyball. They could, for example, have tighter shorts. Female players are pretty, if you excuse me for saying so, and they already have some different rules to men – such as playing with a lighter ball. That decision was taken to create a more female aesthetic, so why not do it in fashion?"

- About women in football.

"I would say they should refrain from any sexual activities."

"I could understand it if it had happened in Africa, but not in Italy."

- Commenting on the match-fixing scandal in Italy.

"Listen, this is a special approach in the Anglo-Saxon countries. If this had happened in let's say Latin countries, then I think he would have been applauded."

"Every game should have a winner. When you play cards or any other game, there's always a winner and a loser. We should have the courage to introduce a final decision in every game of football."

- About matches ending in draw.

"There are not many names the media haven't thrown at me in the last few years. I would be lying to you if I said it did not hurt. You ask yourself: 'What have I done?'"

- In 2014 discussing his treatment by the international media.

"I would say it is a little surprising that the motherland of football has ignored a sacrosanct law or belief that the national team manager should be from the same country as the players. I have never seen Italy, Germany, Brazil or Argentina with a coach from another country."

- In 2008 on the appointment of Italy's Fabio Capello as England manager.

"There is maybe one of the players towards another -- he has a word or a gesture which is not the correct one...But the one who is affected by that, he should say: 'This is a game. We are in a game, and at the end of the game, we shake hands.' And this can happen, because we have worked so hard against racism and discrimination."

- On racism in football.

"We now have three ladies on the board. Say something, ladies! You are always speaking at home, say something now!"

- After the executive committee elected three women at the FIFA Congress.