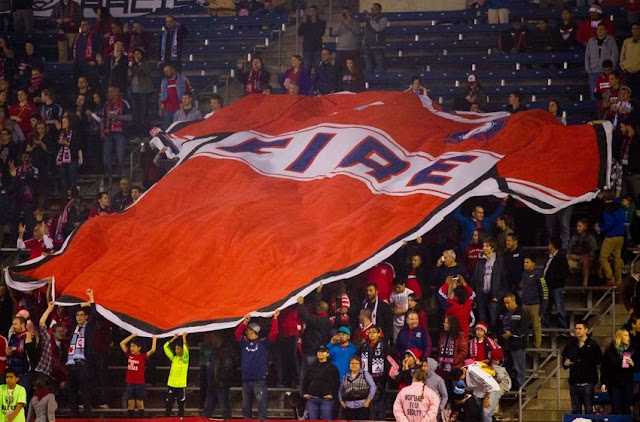 One of the things I used to enjoy about my trips to Chicago for work in the early to mid-2000's was getting the opportunity to take in Chicago Fire matches.

This was in the days before my town, Toronto, had a club in the MLS so the Fire became my team and each season I'd get out to a handful of games at Soldier Field, along with tracking their progress from a distance.

The Fire came into existence on 8 October 1997, on the 126th anniversary of the Great Chicago Fire of 1871 one of the worst disasters of the 19th century.

Founded at the historic Navy Pier, Chicago's new MLS side took their name from this event to recognize its important place in the city's history.

With experienced players such as Piotr Nowak, Jerzy Podbrozny, Roman Kosecki, Jorge Campos and Lubos Kubik the club immediately established themselves as one of the forces to be reckoned with in the MLS.

In the team's inaugural season they won an incredible U.S. Open Cup and MLS Cup double, the first American side to do so.

Over the next few seasons the Fire would capture another three Open Cups and finish as runners up in the MLS Cup final twice. Although the club hasn't been quite able to maintain the heights of that first five or six years, they continue to be one of the consistently strong teams in the MLS and have benefitted greatly off the pitch since their move to their very own Toyota Park stadium in 2007.
SHARE SHARE SHARE