Steve McClaren Sent Me an Email This Morning 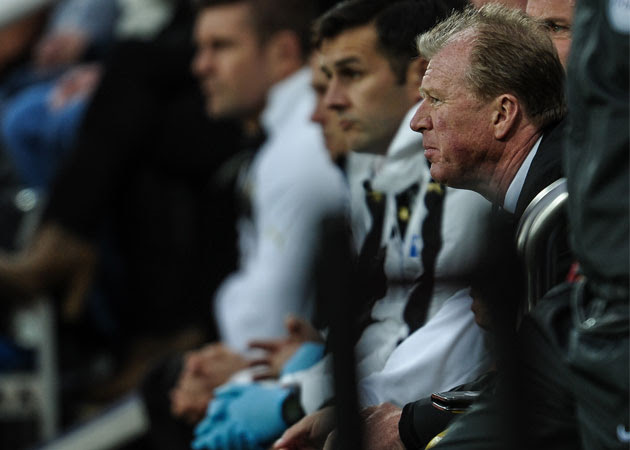 OK, so perhaps it wasn't Steve himself, and even if it was it went to thousands of other Newcastle United supporters. Nonetheless, I was a bit surprised to receive an email from an account named Steve McClaren in my inbox this fine morning.


The letter was in fact a public statement (that can also be seen on the club website), a letter to the fans before the club's Tyne-Wear Derby this weekend with hated rivals Sunderland. Not really a traditional way to make a statement, but perhaps something that was much needed after the Magpies' awful start to the season under the new manager and poor results in the derby itself in recent years.
So what point does McClaren want to get across? Well, here's the entire letter, outlining the new bench-boss' views on the season thus far and the upcoming weekend.

WE WON’T BE COMPLACENT


Win every personal battle, handle the occasion and be disciplined

It's derby day on Sunday and the importance of this match is not lost on me or any of our players. Quite simply it is one of the most important days of the season.

We travel to the Stadium of Light at the weekend delighted to have our first win under our belts and looking to make it back-to-back victories. Needless to say it was imperative that we won last week and whilst we all said beforehand that we would have taken a scrappy one-nil win, the bonus for everyone at the club and, in particular, you the supporters, was that it was an exciting, entertaining game with some fantastic periods of play and of course terrific goals.

It was great to finally send everyone home happy and smiling after what has been a difficult start to the season.

Just as we refused to over-react to the defeat at Manchester City the week before, we have not over-reacted to the victory against Norwich. It was a step in the right direction, but that is all. No one is complacent. We have to ensure we deliver a consistency of high level performance not just over a number of games but also within games.

Gini took most of the plaudits after the game, and rightly so, but there were good performances all over the pitch which pleased myself and the coaching staff. However there were still areas we identified that need to be worked on and that's what we've been concentrating on this week on the training pitch. We have to keep working hard and focussing one hundred percent on getting our preparation spot on for Sunday.

I don't need reminding that we have lost the last five derbies and for everyone associated with the club that is simply unbearable. It wasn't so long ago that we won five in row and we are desperately keen and hugely motivated to turn the tide and bring the points back to Tyneside. The atmosphere is always incredible and I think unique to the North East and we have to go there, stand up and be counted.

There’s no question that our players understand what it means to win the derby. A number of the squad have a great deal of experience of this particular game, but don’t forget that Mitro, Gini and Daryl have also played in huge derbies for their former clubs and the enormity of the occasion is not lost on any of them.

My message to the players is simple. Win every personal battle, handle the occasion and be disciplined. If we can do all that and put one or two of our chances away then we can come away with the positive result we all crave.

Sam Allardyce is a manager I've come up against in the past when he was with Bolton and I have huge respect for him. He gets the job done with a minimum of fuss and if you want to come out on top against one of Sam’s sides every part of your preparation and strategy has to be perfect. It's his first home game with Sunderland and the crowd and players will be fired up. If we at least match that, I am confident the quality within this group will prevail.

Enjoy the game on Sunday and I sincerely hope that come 2pm on Sunday afternoon, we’ve given you a performance and result to be really proud of.