The Worst Quotes in the Short History of Toronto FC 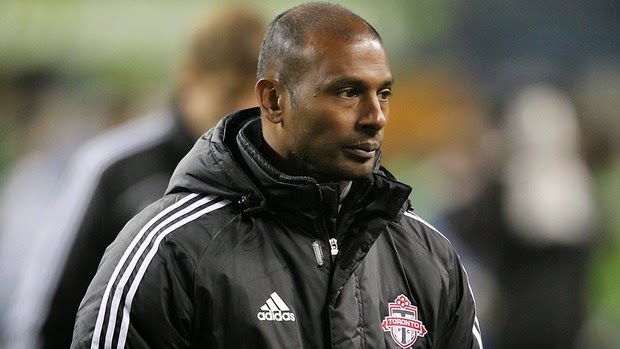 It's not been a good week for Toronto FC. First they lost MLSE CEO Tim Leiweke, who is a big backer of the MLS side but will be leaving his role sometime soon, then they lost Designated Player Jermain Defoe to injury and tonight they lost 3-0 to New England.
Although things seem pretty bleak for the Southern Ontario side, they have had a lot worse times in their history. One of the amusing things that kept fans engaged during the bleak seven years that preceded this one was some of the ridiculous quotes and soundbites from the motley crew of players, coaches and staff at the club.

Here are some of our favourites:

Tom Anselmi:
Sports is cyclical. The plan now is to get on the right side of the cycle.

Aron Winter:
Then DC scored from the corner. That's not nice.

Mo Johnston:
Sometimes you have to take two steps backwards to take one step forward.

Paul Mariner:
Wiederman is one of the best finishers in the modern era.

Paul Mariner to Julian De Guzman:
I am going to send you to a last-place team and let you burn in the heat!

Winter/Mariner Hiring Press Conference, January 2011 - Tom Anselmi:
We think we've got the right team here now, to do the job.

Danny Koevermans, 2012:
This team is setting a record as the worst team in the world.

Richard Eckersley, 2012:
It's been the worst season imaginable.

Milos Kocic:
If Iker Casillas was on this team, I don't think he would do any better.

Tim Leiweke:
What we’ve done to you and your passion with this abuse, they ought to write a book about it. Because it’s the most disrespect I’ve seen to a fanbase in a long time and we’re going to change that.
SHARE SHARE SHARE