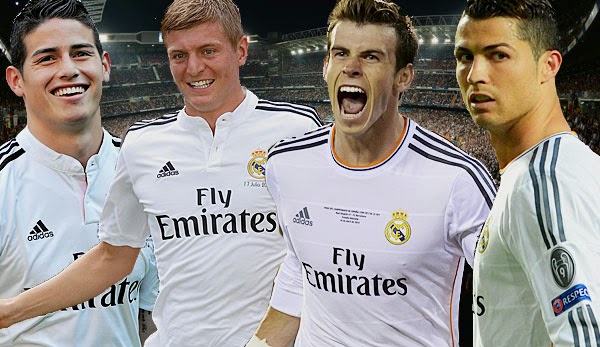 Real Madrid led La Liga with 19.6 shots per game last season, unfortunately that wasn’t enough for them to top the table. They would end up finishing 3rd place behind Barcelona and Atletico Madrid, and for Real Madrid that is not good enough, even if they won Copa del Rey and Champions League.

There was no doubt to me that Florentino Perez would look at this summer’s transfer window as a chance to build his second version of the Galacticos. He was the president of Real Madrid when the first version of the Galacticos was created, so when his team finishes third in the league, it is no surprise that he goes back to his preferred solution.

A team that already had Cristiano Ronaldo and Gareth Bale, the two most expensive players on the planet, could still be improved, and if money is no object there were some names on the market that could take this team to the next level. Perez spent $150 million to acquire two of the best players at this summer’s World Cup in Toni Kroos and James Rodriguez. Two incredible gifted players that could fit like a glove at Real Madrid.

According to data collected by Transfermarkt, the starting lineup that Real Madrid used in the Champions League final against Atletico Madrid had cost Perez around $500 million. The starting lineup fielded in the Supercup against Sevilla was $620 million.

This is not new territory for Real Madrid, they have spent before under Perez. If you look at Real Madrid’s appearances in the 2000 and 2002 Champions League finals, the cost of their starting 11 nearly tripled from $80 million to $250 million between those two appearances. The money was spent on players like Luis Figo, Zidane, Ronaldo and Beckham, they would be the original Galacticos of Perez. The main difference from the first Galacticos to the new version is the age of the players being brought in. The first generation Galacticos were all brought in between the ages of 25 and 29, already in the prime of their careers, while Cristiano Ronaldo, Bale, Kroos and James were all signed before their 25th birthday.

The new Galacticos started the season with a 2-0 win over Sevilla in the Supercup, and even a loss in the second leg of the Spanish Supercup against Atletico Madrid is not enough to remove the shine of this new team that Ancelotti has put together with the Perez. This is a far better team; this new version is younger, hungry, more adaptable and able to provide Ancelotti with more solutions to his lineup needs.

Sure, this is Real Madrid’s most expensive lineup ever, but at least this time around Perez spent the money on young, proven, and talented players that can help Real Madrid build a new dynasty for years to come. To me, Perez has learned his lesson and has built a superior version of the Galacticos, but will the Galacticos 2.0 be more successful, only time will tell.