We could not have a World Cup Heroes series leading up to this years World Cup in Brazil without talking about Diego Maradona. For my generation he is without a doubt the best player that has ever laced a pair of cleats.

His performances at the 1986 World Cup in Mexico play a huge role on his iconic status in the footballing world, and make him an unconditional World Cup Hero. 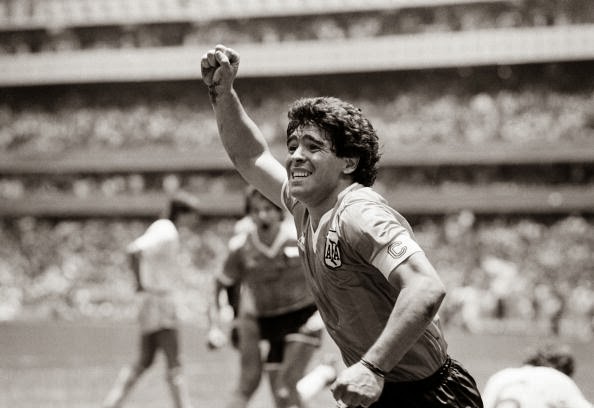 Born in Lanus, Buenos Aires, Diego Maradona was the 5th child and first boy of his family. Poor family and very humbling beginnings, Diego Maradona had a very hard up bringing, and he credits his mother with his desire to succeed so he could provide her with a better life.

Maradona played in 4 World Cups, from 1982 to 1994, but it was in the 1986 World Cup in Mexico where he had his best performances and by himself carried his country on his shoulders. In one game he managed to score the two most iconic goals in World Cup history, but we will look into that later on.

Argentina was drawn with Italy, Bulgaria and South Korea in group A. Maradona was the Argentinian captain for this tournament and he would prove to be a true leader, and that leadership would have to start on their first group match against South Korea.
Maradona had a huge impact in this first match, not with goals but with 3 assists that resulted in the three Argentinian goals. The South Koreans fouled Maradona almost everytime he touched the ball, they took a page out of the Portuguese team that played Brazil of Pele in 1966, and massacred him with fouls. It wasn't enough to stop him and Argentina won the game 3-1. 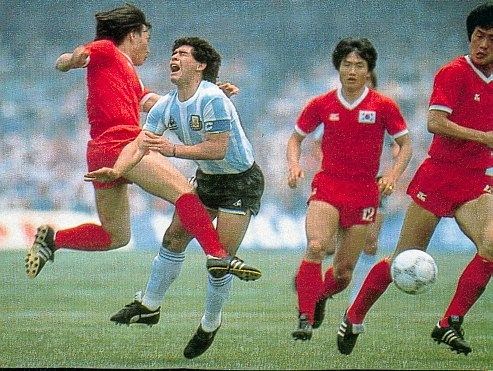 Second group game would have them face Italy. This was without a doubt the hardest game of the group stage, and would put Maradona against a country that he was now calling home. Playing for Napoli in Serie A he was an idol of the young italians, but this was the World Cup and it was all about the results and advancing. Italy took an early lead at the 7th minute but Maradona tied the game in the 34th minute and that would be the final result. It was a very even game between two strong sides that had a lot of respect for each other.

Last group game was against Bulgaria. This was a fairly easy match for Argentina, they had a better team and after 3 minutes of play they were up 1-0. Burruchaga scored in the 77 minute after a pass from Maradona to make it 2-0 and that would be the final result.
Argentina finished first in Group A with 5 points, and Maradona had 4 assists and 1 goal, but his best was yet to come.

During the 2nd sound (knock out stages), Argentina was going to be faced with a good Uruguayan side. Both teams new each other well from qualification stages and were very even on the field. Argentina won 1-0 and Maradona had one of his more quiet performances in the tournament. Uruguay held him in check for most of the game and he really had a hard time making the difference, but perhaps that gave him extra motivation for the upcoming quarter-final game against England.

This is one of the most iconic matches in World Cup history. This match was held 4 years after the Falklands War between Argentina and UK and added even more intensity to an already intense rivalry between these 2 countries. The quarter-finals match between Argentina and England has the ability to have the 2 most talked about goals in World Cup history, and both goals were scored by Maradona. These two goals and his performance in this game cemented his status as a World Cup legend.

The first goal is known as the "Hand of God" goal. Due to a Steve Hodge missed clearance, the ball cork screwed into the box, Peter Shilton came out to punch the ball, but a shorter Maradona jumped and with his hand punched the ball in the net. 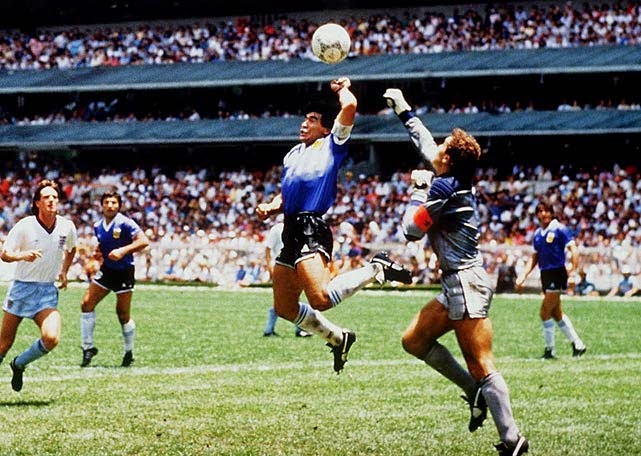 The referee didn't see it and validated the goal, even most of the commentators that were covering the game didn't see it at first glance. So the goal stood. Maradona later said "I was waiting for my teammates to embrace me, and no one came...i told them, 'Come hug me, or the referee isn't going to allow it.'".

The second goal is know as "The goal of the century". Maradona picks up the ball in Argentina's midfield and dribbles through an English team, that is unable to stop him, and scores a magnificent goal.


Maradona had just handed a 2-0 lead to Argentina by scoring 2 goals 4 minutes apart, and not just any goals, two epic goals that have indeed become part of footballs folklore. England would score a goal to make it 2-1 but Argentina was going to the semi-finals.

The semi-final game had Argentina facing Belgium. It would be another Diego Maradona show. He completely dominated the game and once again showed the world all his class.
It was a case of Maradona vs Belgium more than Argentina vs Belgium. 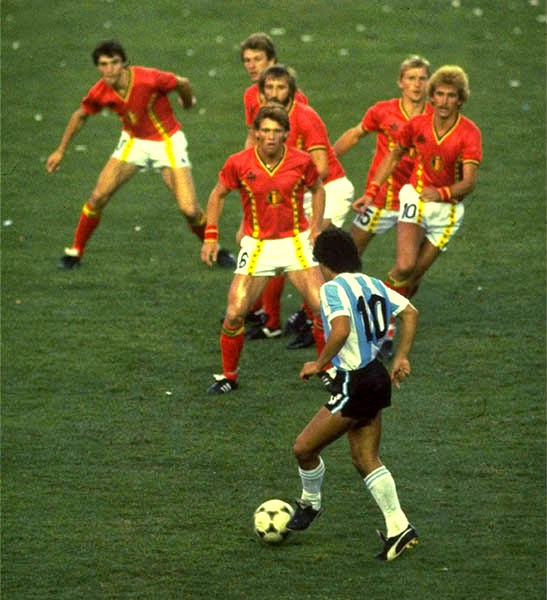 His 2 second half goals were enough for a 2-0 win and a ticket to the finals against West Germany. The Belgium defense wasn't strong enough to last 90 minutes against the genius of Maradona, not even when you park the bus in front of the net.

Franz Beckenbauer was the coach of a very experienced West Germany side that included Lothar Matthaus, Karl-Heinz Rummenigge, Rudi Voller and Andreas Brehme. So this was going to be a very difficult final for both teams.
Maradona saw an yellow card only after 17 minutes and this influenced how he approach the rest of the game, but a goal in the 22nd minute and one in the 56th minute gave the Argentinian team a 2-0 lead and it looked like this was going to be another walk in the park. When you are playing a West Germany side this talented nothing is easy, and West Germany subbed in Rudi Voller and he completely turned this game upside down. He assisted Rummenigge in the 74th minute and later scored in the 81st minute to tie the game 2-2. It looked for a minute that Voller was preparing to take the spotlight away from Maradona and crown himself as the hero, but Maradona wouldn't have any of that.
Maradona had a wonderful assist in the 84th minute to Burruchaga that gave Argentina the late 3-2 lead and that would be the final result. 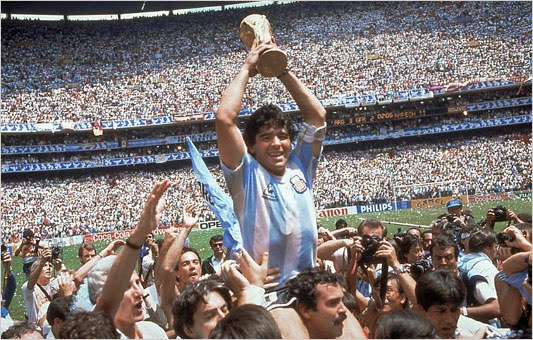 Maradona was Argentina, and the captain took his country on his shoulders all the way to the final. Now that the cup was won, it was time for his country to carry him on its shoulders.