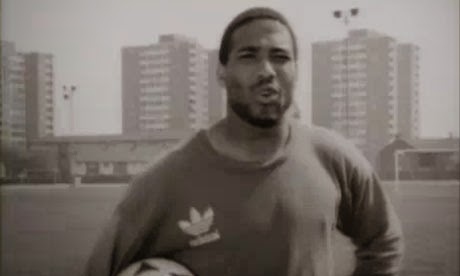 All of us here at FootyFair love music and football, but sometimes the things you love simply shouldn't mix. You wouldn't drop a scoop of butterscotch ripple ice cream into your pint of Sapporo, so why would you not expect your favourite musician to look anything other than a little silly when singing about holding midfielders?

Regardless of that, the following are a few examples of when pop music met football. Some times it works, other times it's an assault on the ears.


Shakira: Waka Waka
No, not the Fozzy Bear Song, but the official song of World Cup 2010. Despite the great opening shot of the 2006 final, along with some fairly decent footage interspersed throughout the video, you can't help but notice the awkward and embarrassed looks on some of the players. The lyrics to this little ditty are also decidedly clunky.


Mike Nedza: TFC Anthem
Where do you start with this one? This song makes the key mistake of working the names of players into a horrible rap, with a Mayor McCheese Euro Dance beat playing in the background. Like the early days of TFC it's incredibly positive and earnest, but also like the early years of TFC it's a pile of shit.

Liverpool FC: The Anfield Rap
Sometimes in the course of your life you'll see or hear something so spine tinglingly bad it almost rebounds to being good. The Anfield Rap is like the Plan 9 From Outer Space of football songs. It is so bad, it's almost hypnotizing.

England United: Top of the World
After the terrific England anthem 3 Lions by The Lightening Seeds, there was a bit of anticipation as to what the England song for 1998 would be. When it was announced that a super group consisting of Echo & The Bunnymen, Space, Ocean Colour Scene and the Spice Girls were going to be recording the England World Cup song many feared the worst. They were right to be afraid as the resulting treacle slop was described by former striker Ian Wright as just "Bollocks". I couldn't have put it better myself.


New Order: World in Motion
After suffering through the above four monstrosities, we here at FootFair wouldn't want to send you away with a sour taste in your mouth, so here is New Order with arguably the Greatest Football Song of all time. Enjoy!