Four of the Worst Title Defenses in English Football History 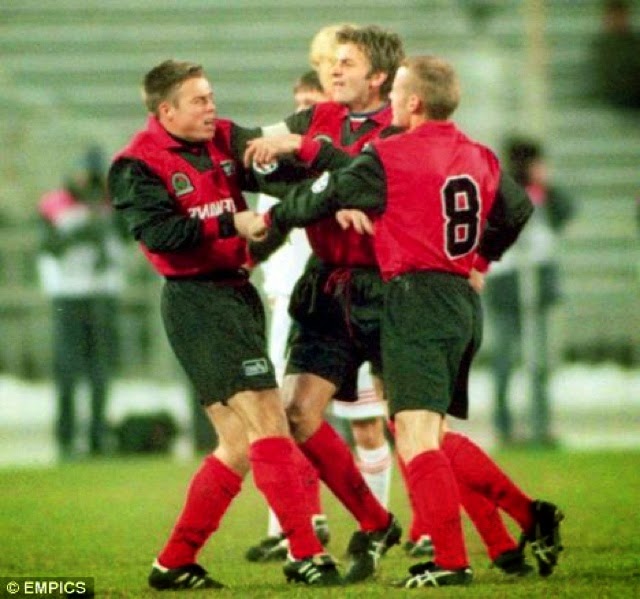 As I sat blissfully sipping my coffee and trying not to stare at the hot moms in yoga pants who were strolling by with their lattes, an old man stopped at my table. He pointed at the crest on my jacket and said, in what I think was a Croatian accent, "United not so good this year, eh?"

As his Bond villain like laughter filled the shop, I started to reply but stopped myself. What could I say really? Our season had gone about as well as a Lindsay Lohan rehab attempt. We have been shit.

Due to a lack of investment from the Glazers, an aging squad of prima donna's and a manager in David Moyes who was clearly out of his depth, the team who finished first by 11 points last term had tumbled down to 7th place. This led me into thinking about some of the other poor title defences in English football history and these were the four that I came up with:

To find the Grandaddy of disastrous title defences you have to go all the way back to the pre-Ryan Giggs era of the late 1930's. In the days when clubs could shout down the nearest mine shaft to find a ball playing magician, Manchester City had one hell of a season in 1936/1937, as they took the clubs first title. Under the management of the incredibly named Wilf Wild, City did not lose after Christmas Day and scored an incredible 107 goals in 42 matches.

The following season, despite leading the old First Division in scoring again, The Wild Men, as no one probably called them, couldn’t keep the ball out of their own net as they dropped to 21st place and were relegated. In doing so, Manchester City became the only team to have been relegated the season after winning the league title and also the only team to be relegated from the top division despite being the leading scorers.

I think Noel Gallagher wrote a B-Side about this turn of events, but you shouldn't quote me on that.

Under the management of Alf Ramsey, and in no small part thanks to the high scoring duo of Ray Crawford and Ted Phillips, the Suffolk club won an unlikely League Championship in 1961-1962 in their first season in the top flight. Ramsey put together a side of solid, but largely unspectacular players, got them to fit his system and caught the big dogs of the old First Division by surprise.

Unfortunately for Ipswich, but fortunate for the writers of the mid-90’s classic Three Lions, the English Football Association came sniffing around after their manager and in the spring of 1963 appointed Alf Ramsey as the new National Team boss. With perhaps Ramsey’s eyes already on the England job and the goals drying up for Crawford and Phillips, Ipswich sunk to 17th place in the league and were knocked out of the European Cup by eventual winners AC Milan in the second round.

As for Ramsey, he went on to give English Football its greatest ever moment on July 30, 1966. Did the third goal cross the line? Of course it did, a Soviet linesman told us so and if you can't trust a hard line Communist who can you trust?
Jules Rimet is still gleaming and all that by the way.

The fact that Leeds United won the 1991/1992 Championship in the final year before the start of the Premiership seemed so bizarre at the time. Manchester United seemingly had one hand on the trophy that spring before badly faltering in April and handing the title to Howard Wilkinson's side. Wilkinson always seemed, to me at least, to be the sort of manager who would bore players to tears with a bunch of x's, o's, and complicated arrows on a blackboard. But in fairness he did some great work in rebuilding a side that had been in terminal decline since the Don Revie era. The Leeds midfield of Gordon Strachan, Gary Speed, Gary McCallister and the combative David Batty was quite formidable and with the mercurial talent of Eric Cantona ahead of them it becomes clearer how they won the league that year.

But like the chart success of the early '90s dance pop duo 2 Unlimited, Leeds reign at the top was short lived. They finished a shocking 17th in 1992/1993, didn't win a single away match all season, barely avoided the drop and crashed out of the Champions League over two legs to Glasgow Rangers in the second round.

Wilkinson also sold a certain Eric Cantona to Manchester United a few months into the season, and the rest as they say is history.

Backed by Jack Walker's millions and the goals of Alan Shearer, Kenny Daglish's side pipped Manchester United to the title on the last day of the 1994/1995 season. Sure, Cantona's lengthy suspension for drop kicking a thug at Crystal Palace had certainly helped, but this was a wonderful achievement for an unfashionable side. However, with Daglish's move upstairs after the season and the sale of Shearer to Newcastle, you knew there was more chance of Jimmy Hoffa serving you breakfast at Burger King next Tuesday than of Blackburn retaining the title. Without Shearer's goals the club finished a disappointing 7th under new manager Ray Harford.

Rovers ill fated Champions League appearance is best remembered for a farce of the highest order against Spartak Moscow. Graeme Le Saux, attempting to presumably kickstart Blackburn's campaign, took a moment during the match to suggest to David Batty that Bernardo Bertolucci's Last Tango in Paris had more artistic merit than the live action Flintstones reboot with Rick Moranis that Batty loved. Predictably it all ended in horrible violence in the Moscow snow, but oh how we laughed.*


(*Editors Note: This may not have happened quite like this.)