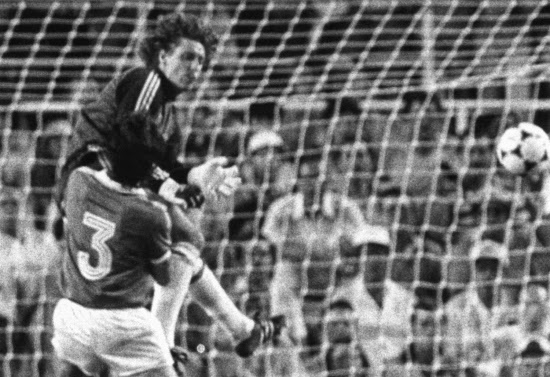 For all of the fantastic goals, saves and magic moments in the World Cup, let's spare a thought for the less talented or the mentally unstable players who left their mark on someone's legs, chest or head in this great tournament. The following are the five worst incidents of ultra-violence in World Cup history:

If at first you don't succeed in kicking someone up into Row Z, make like Cameroon and try, try, try again. Trailing 1-0 in their 1990 World Cup opener, Argentina's Claudio Caniggia made the mistake of running straight through the Indomitable Lions midfield, before he was clipped twice by wild lunges and then put out of his misery by a flying Benjamin Massing. Some x-rated tacklers are known for "leaving a boot in" and Massing literally did that here, as his shoe came flying off when he assaulted Caniggia. The referee didn't see the funny side and showed him a straight red.

Some old school managers in Britain would shout at their players to "get stuck in" before taking to the pitch and Nigel de Jong certainly did that in the 2010 World Cup Final. The only problem was, instead of putting in some extra effort, he literally got stuck into Xabi Alonso's chest. The fact that he unleashed a kick that Bruce Lee would be proud of only warranted a yellow card is still hilarious.

It may be an old football stereotype, but some goal keepers are clearly insane and Germany's Toni Schumacher was as mad as they come. In a classic 1982 World Cup Semi Final against France, future political hack... I mean UEFA President Michel Platini, sent a delightful ball forward for Patrick Battiston deep into extra time. As the French defender went to bring it down though, the big hairy lunatic Schumacher decided that the best defence is a good offence and smashed him right in the face. Battiston was knocked out cold and stretchered off the pitch. Schumacher wasn't even booked and the West German's won on penalties. Sometimes there's simply no justice in the world, folks.

Needing only a draw to see themselves through at the expense of Scotland, Uruguay decided that rather than grinding out a dull 0-0 draw, they'd make things a bit more interesting by going down to ten men. Just 56 seconds after the kickoff, Jose Batista went straight through the back of Gordon Strachan for a straight red card. With Scotland's main creative force hobbled, Uruguay then proceeded to kick, elbow and time waste their way to the 0-0 result they needed to progress in the competition. After the match Scottish FA Secretary Ernie Walker called Uruguay, "the scum of world football", while Strachan was presumably left icing his legs and thanking his lucky stars it wasn't his ginger nuts that caught the full force of Batista's lunge.


The Battle of Santiago

When a match is labeled as "The Battle of Santiago", you just know that it wasn't played like a fun kickabout in the park. Prior to the match, some Italian journalists had labeled Chile's capital Santiago as a backwater filled with illiterate drunks and prostitutes. Needless to say, the hosts were not impressed and the anti-Italian sentiment in the country led to what is considered the dirtiest match in World Cup history. It's impossible to pick out one tackle from this descent into anarchy, but the neck high tackle on Mario David has to be up there. The highlights from this encounter should be viewed when your kids have gone to bed by the way.