In its 130 year history, St. Johnstone has never won a major trophy. In fact, this was their first ever trip to the Scottish Cup Final, with Dundee United who had won the cup on two previous occasions and 90 minutes of football, standing in their way to the most glorious achievement in their club's existence. A goal in each half and a clean-sheet for keeper Alan Mannus, wrote a new chapter in the books of Scottish football. 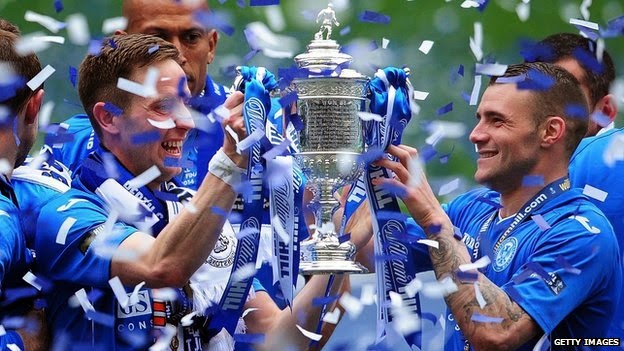 A surprise finalist from the second tier of Austrian football St. Polten, came into the Austrian Cup finals as a major underdog, matching up against power-house Red Bull Salzburg. Although a first ever cup win was not in the cards for the 14 year old club, they did manage to provide spectators with entertaining football in a 4-2 loss.

Every once in a while Major League Soccer provides us with entertainment value that is just too hard to ignore. In this early season match-up between Portland and Columbus, every aspect of exciting footy was on display. Beautiful goals, high score, a sending off, a penalty and an unlikely draw for the club playing with 10 men, were all a recipe to make our list of top 5 matches from the past weekend.

After enjoying a remarkable season, Atletico Madrid traveled to Barcelona to take on the Catalan giants in a match that would crown the Spanish league champions. Needing a draw or a win to clinch the title, Atletico were on the back-foot right from the get-go, with star men Costa and Arda Turan suffering injuries early in the match and having to make two major changes in just the first 25 minutes of this affair. Barcelona took advantage right after the substitutions when Alexis Sanchez put the ball in the back of Atletico's net in the 33rd. But the club from Madrid as determined as they were all season long, found a way to claim their first league title in 18 years after Diego Godin tied the game up at 1-1, a score that would remain.

By far the most entertaining match of this past weekend was the FA Cup final between Arsenal and Hull City. With the London club looking for their first major trophy in almost a decade, while the Tigers from Hull looked to shock English football spectators by achieving the unlikely. Inside the first 10 minutes of the match, spectators all over the world surely thought that they are watching a match that will be historically significant as Hull City went 2-0 up with quick corner-kick goals from defenders James Chester and Curtis Davies. With more than 80 minutes remaining in the match, there were victory-like celebrations from the Hull faithful and manager Steve Bruce, and tears on the faces of some Arsenal fans at Wembley Stadium. But an incredible free-kick strike from Santi Cazorla just 8 minutes later brought Arsenal back into the match, and switched the momentum around for the Gunners, who would eventually win their 11th FA Cup, 3-2 in extra-time.