When Pele Met Stallone - The Cult Classic 'Escape to Victory' 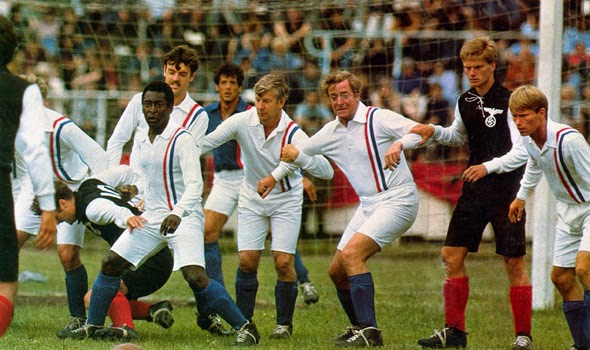 Michael Caine played the ball into Pele. As the great Brazilian clutched his damaged ribs with his left hand, and used all of his remaining strength and skill to hold off the German defender, he spotted England's Bobby Moore galloping down the right wing. Pele eluded his marker again and sent it out wide to Moore. Receiving the ball on his chest the hero of 1966, brought it down and sent a perfect return cross into the box for Pele. The three time World Cup winner, with his back to goal, rose in the air and unleashed a rocket of a bicycle kick past the sprawling keeper.

No, I haven't smoked a big bag of peyote and am wandering around the desert right now, with only a purple talking coyote for company while I write this. This in fact happened and I have the DVD to prove it.

The film Escape to Victory, known as Victory in North America, is little more than a curious line on the IMDB pages of director John Huston, along with stars Michael Caine and Sylvester Stallone, but to football fans it's a must see cult classic.

The film was inspired by the now discredited "Death Match", when a Ukrainian team comprised of players from Dynamo and Lokomotyv Kyiv played a team of Nazi Air Defence Artillery officers during World War 2. The Soviet propaganda machine, keen to sell the message that their citizens had bravely resisted the Germans at all opportunities, later sold the story that the Ukrainian players were all shot by the SS after the match for refusing to purposely lose. Although some of the players were later killed in the war, the truth is that this match was fairly played by both sides, with no repercussions, and in fact there were many other matches between German and Ukrainian sides during this period.

The truth around the "Death Match" emerged from eyewitness accounts after the fall of the Soviet Union in 1991, but in 1980, when Escape to Victory was in production, it was very much taken as a great story to build the basis of a film around.

With Escape to Victory not even warranting a single sentence in the great John Huston's biography, it's curious as to why he ever decided to direct this film. Sylvester Stallone and Michael Caine on the other hand, besides being in it for the money, were both interested in football and enthusiastically threw themselves into the production.

Besides the legendary Max Von Sydow, as the friendly German POW Camp Major, the rest of the main cast was made up of real footballers. The producers cleverly assembled a squad of players from all over the globe, so the film would attract a bigger world wide audience. In their biggest casting coup, they managed to sign the recently retired Pele for the film. One of the greatest players ever, Pele was the one player even non-football fans had heard of and his involvement encouraged other players to sign up for the picture.

The other players involved were Poland's Kazimierz Deyna, Scotland's John Wark, England's Bobby Moore, Osvaldo Ardiles of Argentina, the Belgium striker Paul Van Himst and the Netherland's Co Prins. The remaining players in the picture were brought in from Bobby Robson's Ipswich Town.

By all accounts, apart from Stallone acting every bit the Hollywood giant he was at the time, the players and actors enjoyed playing football all day, saying some cheesy lines for the camera and drinking long into the night during the production. 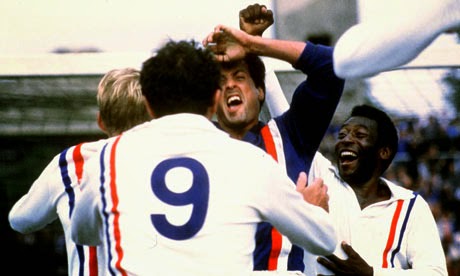 As for the story itself, well lets just say it's a shitty knock off of The Great Escape with a football match at the end. The plot involves Allied POWs playing a match in Paris against a German Army side. The players are encouraged by the British to use the match to cover an escape attempt. The story doesn't make a lot of sense, and the acting wouldn't look out of place in one of those diabolical Sharknado films on the SyFy channel, but the films final twenty minutes make it all worth it.

The match cinematography by Gerry Fisher is simply stunning, and with the on field action actually directed by Pele, it makes for exhilarating viewing. Even Stallone's dodgy keeping and "unique" instructions to the other players can't overshadow the brilliance of the final match.

Besides a great slow motion sequence where Ardiles bamboozles several defenders, the film is best remembered for Pele's famous bicycle kick. He did it in two takes, as the keeper somehow got a finger to his first effort and put the ball around the post.

Despite some of the dodgy drama that preceded the final match, there is one line that sums up the spirit of this film. With the allied side down 4-1 at half time, but on the verge of escaping captivity through a tunnel under the dressing room, Russell Osman's character convinces his teammates to come back out for the second half by saying, "I don't want to go, let's go back, we can win this."

If that doesn't bring a tear to the corner of your eye and make you clench your fist before yelling, "Get back out there boys and stick to these Nazi scum!" I don't know what will.

Sure, the period detail isn't the best with some of the spectators sporting '70s style bell bottoms and track tops, but when the players dash out to freedom after **SPOILERS** securing a 4-4 draw, you can't help but cheer.

Escape to Victory (aka Victory) is available on DVD and should be easy to find at most major retailers. In the meantime, sit back and enjoy this bit of brilliance from the Brazilian master.