This World Cup will be without some of the games biggest stars. Injuries leading up to a World Cup is normal. After long seasons players tend to breakdown and pick up an injury at the tail end of the season, but never has a World Cup been without as many stars as this one in Brazil. 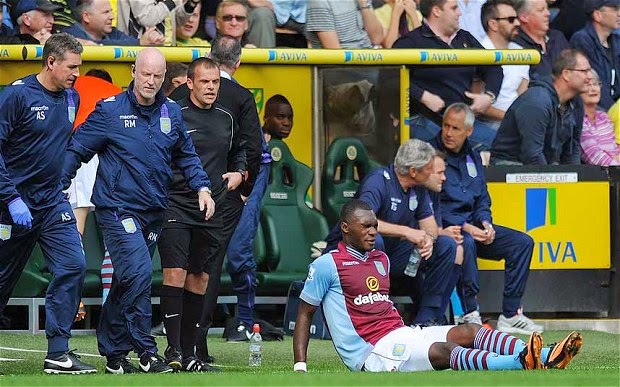 I looked at the injury list of players missing the World Cup in Brazil and decided to put a best XI forward.

Valdes will be missing this World Cup with an anterior cruciate ligament injury that he suffered in March. He would most likelly be on the bench for Spain, but his presence would have given Spain a bit more cushion at such delicate position.

The full-back that could play either on the right or left side of the defense fractured both the fibula and tibia on his right leg during a QF match in Europa League against AZ Alkmaar. It was a freak accident that so him kick his team-mate Luisao instead of the ball during a challenge at midfield.

He suffered a cruciate ligament injury in November 2012 and hasn't played since.

The PSV defender had an impressive season, but a knee ligament injury has put him out of the World Cup in Brazil.

A knee injury in the second half of the season has landed him on the coach. He will miss his chance to help Spain win their second World Cup trophy.

An ankle injury has placed the Fiorentina midfielder out of the World Cup and without a chance to help his country making a push pass the group stage.

The Roma player injured his knee back in March playing for his club and immediately it was obvious that he would not be going to the big dance.

The Arsenal player was ruled out of the World Cup this summer after suffering a cruciate ligament during an FA Cup match win against Tottenham.

The Bayern Munich midfielder suffered a knee injury that was originally thought to be minimal and not impact his presence at the World Cup. He has suffered a setback and is not a guarantee absence of this years tournament.

The striker ruptured the achilles tendon during a training session and has been ruled out for a minimum of six months.

The Monaco's striker dream of going to the World Cup came to a halt when he suffered an anterior cruciate ligament in his left knee in January, during a French Cup match with Monaco.