Is Cristiano Ronaldo The Achilles' Heel of Portugal?

Will CR7 be the achilles' heel of the Portuguese national team at this years World Cup? That is the question on everybody's mind, including Paulo Bento, the national team coach.

Cristiano Ronaldo hasn't been 100% since the matchup against Sweden during the playoff that gave the access to the World Cup. He was even in doubt for those two matches with what was thought to be a minor knee problem.

He played both games and was decisive in placing Portugal in the World Cup scoring 4 goals between those 2 matches, and i don't think it will be a surprise to any when i say that without a healthy CR7, Portugal chances of advancing out of the group stages are slim to none. A miracle could happen, but it would take a larger miracle than turning water into wine.

CR7 missed several matches with Real Madrid after those two games against Sweden with what was believed to be a thigh injury. He missed out on Champions League matches with Galatasaray and Dortmund, La Liga games and even the Copa Del Rey final against Barcelona.

When he exited the field against Valladolid, after 8 minutes on the field it was painfully obvious that he was not 100% or not even close to being 100%. At that time in Madrid, the focus was still in winning La Liga and the 10th Champions League, but with an injured Cristiano Ronaldo and dropping crucial points in the hunt for 1st place, it became obvious that the title was lost, so it was time to save him for the Champions League final.

Madrid did the smart thing, rested him during the last La Liga matches and tried to have him close to full fitness for the Champions League final. He would indeed play the final but he wasn't the CR7 that we know, he was obviously suffering from something that would allow him to be free on the field and use all his talents.

Madrid would win the Champions League, but the cost of that win would be paid by Portugal at the World Cup. One can argue that the club plays his salary so if he isn't fit to represent Portugal so be it, he needs to stay healthy and perform for those that pay him. I have to agree with that, and if i was Real Madrid i would put pressure on the Portuguese National Team coaches, doctors and federation to not use him unless he is 100%.

Real Madrid has started that pressure, and it starts by having Cristiano Ronaldo travel with Real Madrid doctors to the national team camp to work with him on his recovery. This either says that he doesn't trust Portugal's doctors, or that Madrid want to keep a close eye on their most treasured investment. In addition to that, Florentino Perez, has stated to the press that Ronaldo should only play if he 100% fit and anything else is not admissible. Real Madrid is a powerful club, and these warning signs shouldn't be taken lightly. 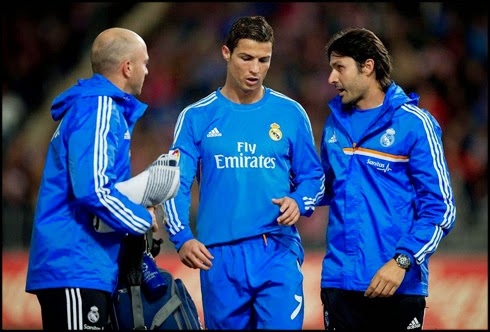 According to reports coming out of the Portuguese national team camp in the USA, Ronaldo is actually nursing two injuries, not one.

He is currently battling a thigh strain and tendinitis in his left knee, that is the medical reports coming out of the Portuguese FA. These are injuries that require rest something he hasn't had for most of the season, and when he could be going on vacation to get that needed rest he sees himself working to get fit so he can play in the World Cup.

Portugal has two friendlies before the start of the World Cup and we won't be seeing Ronaldo on the field during those two games. The earliest we will see him would be against Germany on June 16th for the first group stage game. I believe he will play that game, but i don't see him being very effective, and possibly missing the following games with Ghana and USA.

We are looking at two injuries that may not be a risk of serious long term problems, but require huge amounts of rest and treatment, and a very slow and calculated work back to fitness regime. These are injuries of over use, and only with rest can you get back to normal. Ronaldo is not a player that can take a break on the field, his weapons are speed, explosion, quick dribbles and ability to run at players. Considering the difficulty level of the first match against Germany, my question is how effective will he be, and will he be able to finish the game so he can play the following two? I don't believe he can. 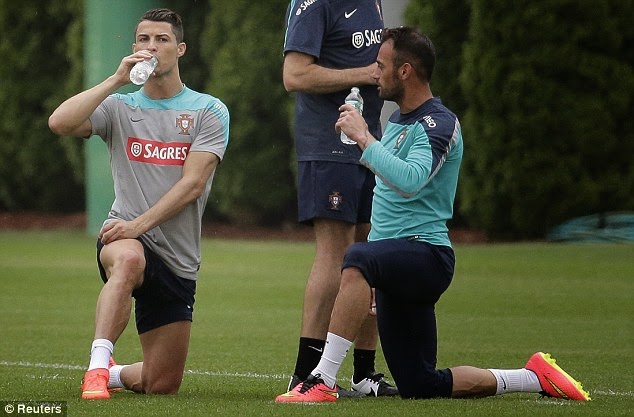 Portugal will have to be prepared for a plan B because i don't see Ronaldo able to be at his best during that first game, and possibly the rest of the tournament.

The Portuguese FA has been quick to point out that he is working and progressing well, yesterday he started light runs, and playing with the ball as part of his recovery plan. The real question will be how will his body respond when he tries to sprint for a ball or is tackled while running down a wing?

A fact remains, Portugal without Ronaldo are far weaker than an Argentina without Messi. Portugal depends on Ronaldo, and if they are to advance out of the group stages they will have to depend on eachother.
SHARE SHARE SHARE