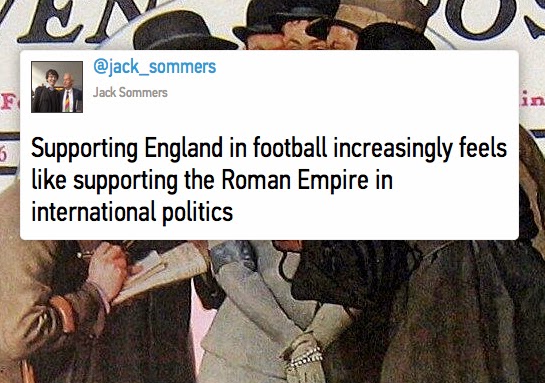 With the World Cup's Group Stage finished and the knockout rounds starting this weekend, we took a moment to capture some of the Tweets that made us laugh over the past two weeks.

These tweets, from writers, celebrities and fans, often capture the events on and off the pitch as they occur in a unique lens and are of course completely uncensored.

If you come across any gems that we've missed, feel free to copy them into the comments below.


I quite like Robben, probably because he reminds me of one of my testicles
— Frankie Boyle (@frankieboyle) June 23, 2014


Fuck knows what FIFA would do if they saw me in the changing room. Once bit Matt Taylor's ballbag, pulled it out & played it like a banjo.
— notBigSam (@TheBig_Sam) June 26, 2014


How can you not love a team who's coach is called Jose Peckerman?
— Irvine Welsh (@WelshIrvine) June 24, 2014

Ronaldo on Suarez: "My young kids used to bite me and I'd punish them. In my home, punishment is called the dark room with a big bad wolf"
— Owen Gibson (@owen_g) June 26, 2014


If you really think about it, this sentence is pretty fucking mental RT @ESPNFC The ESPN panel looks back at Suarez's past biting incidents.
— Jay (@Jay_in_Essex) June 24, 2014


He's not allowed in stadiums either. Literally like a dog. Except not even as a guide.
— Nooruddean (@BeardedGenius) June 26, 2014


Picturing Luis Suarez settling down to a game of FIFA and an actual FIFA representative tapping on his window and wagging his finger at him.
— pauliegunn (@PaulGunning1) June 26, 2014


Seen enough WWE to know that this stadium ban means Suarez is gonna come out the crowd when the ref is k.o'd & score the winner in the final
— Brian (@Brianatlive) June 26, 2014


IGNORE THE HATERS AND LOSERS NANI MATE, I THINK THE STARS ON YOUR HEAD ARE COOL
— NEO (@WELCOME_HERRERA) June 26, 2014


And at the back of the stands, the ghost of Jozy Altidore smiles, winks and then vanishes. His work here is done.
— Iain Macintosh (@iainmacintosh) June 26, 2014

I've got my face painted like an English Bulldog, but fuck me, that Italian national anthem has me aroused. I could genuinely wank to it.
— notBigSam (@TheBig_Sam) June 14, 2014


Painful to watch England now we're out. Like digging up a dead pet for a last look.
— Russell Brand (@rustyrockets) June 24, 2014


This World Cup has been disappointing for England but on the upside the games haven't been ruined by the fuckin England band. #everycloud
— STAND (@STANDfanzine) June 24, 2014


Fun and Refreshments During the World Cup

Ramos joins Ozil on my list of players who look like they're on pretty decent ecstasy
— Frankie Boyle (@frankieboyle) June 18, 2014


You just know if your name was Boubacar Barry people would constantly expect you to be a total party animal. #WorldCup
— The Yorkies (@theyorkies1812) June 19, 2014


The sudden "we've always been into soccer" phenom has even spread to the gangbanger house on my walking path. Good work, FIFA.
— Ed Brubaker (@brubaker) June 26, 2014


What a shame. Michael Schumacher just watched 5 minutes of this and slipped back into a coma :( #nigeriavsiran
— Iain Davidson (@SnideRogue) June 16, 2014


It's a good thing this game is merely a clever ruse by Ben Affleck to smuggle Fulham midfielders out of Iran.
— Nooruddean (@BeardedGenius) June 16, 2014


How many people have picked up World Cup injuries on the trek from couch to fridge? Pal of mine fell after too much Stella and did his knee.
— Irvine Welsh (@WelshIrvine) June 26, 2014