10 Questions with a Pro - Mauro Eustáquio 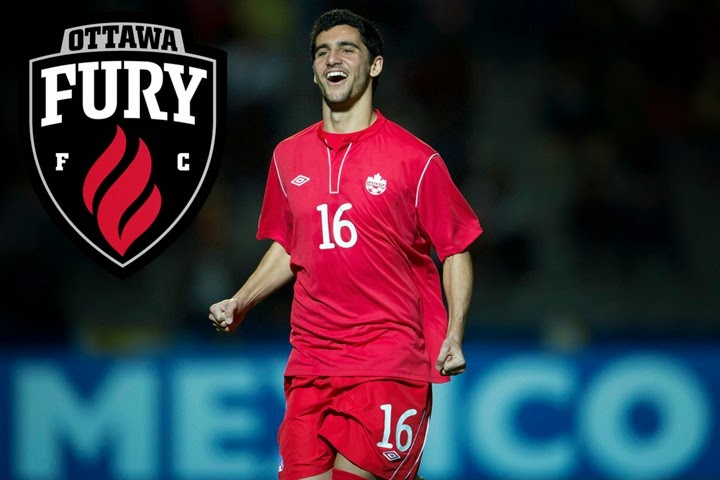 In our new series, 10 Questions with a Pro, this week I chatted with Ottawa Fury FC midfielder Mauro Eustáquio.

Mauro Eustáquio currently plays for Ottawa Fury FC in the NASL, he is also part of Canada’s U20 squad and has played in Portugal for Uniao de Leiria U20 squad, Sporting Pombal and Naval.

FootyFair: Since we are in the midst of a World Cup, what is your favorite World Cup memory?
Mauro Eustáquio: For me the World Cup is the most exciting sport tournament in the world. Millions of people stop to watch it all over the world. It is amazing to see. For me, the 2006 World Cup was the one that marked me the most. First, because it was the last World Cup where world class players like Luis Figo, Zidane, Beckham, participated in. I grew up wanting to be like these players. Each one marked me in a different way, but without a doubt Zidane’s head butt was something that marked me. I never thought that someone with his class and posture would lose it like that. Marco Matarazzi must have said something crazy to him (ahahah).

FF: If you could pick any current player at the World Cup and have the ability to replace yourself with him, whom would that is and why?
ME: If I could I would probably take Luiz Gustavo’s spot in the Brazil squad. Only because the World Cup is in Brazil and I could only imagine what each player feels when they step on the field to sing the national anthem. The atmosphere and the support of the home fans must be insane. I wish this World Cup would have been in Portugal, and then my pick would have been any Portuguese player, for all the same reasons but also because I would get to play with the best player in the world, Cristiano Ronaldo.

FF: What was your first experience watching a live professional soccer match?
ME: One of the first games I watched live was Benfica vs Anderlecht for the Champions League. I was younger and I am a big Benfica fan. Everything that happened in that game I can still remember. When I talk about this game I get a big smile on my face because everything about it was so remarkable. Saw one of my favorite players and Benfica legend, score a goal. When Rui Costa scored the winner the stadium almost fell!!!! (hahaha)

FF: I see that you are a huge Benfica fan. On this year’s team what player do you identify yourself the most with and why?
ME: Yes, I am. Best club in the world and this year we almost had a perfect season once again. I’ll probably have to say Enzo Perez just because of the passion he has for the game and the work ethic he puts on the field each time he plays. Great overall player and I am huge fan.

FF: Coming to play in the NASL for the Ottawa Fury FC must have created some challenges for you. Why the Ottawa Fury and why the return to Canada at this point in your career?
ME: It was definitely a challenge. I am away from my family and that is the toughest part, but since day one the support I got from them, on and off the field, was out of this world. I can only be thankful for that. I came to Ottawa Fury because I figured that it was the best team at this moment for my soccer career. The team’s project is something that I am really looking forward too. It’s a really good place for me to learn and step up my game. Speaking to Coach Marc before pre-season and him telling me what the clubs identity was going to be, got me excited and proved to me that it would be a perfect fit. Plus, being Canadian gives me a better chance to continue to be scouted by the Canadian National team and I can hopefully continue to get called to play with them.

FF: How different is playing in Portugal vs. playing in North America?
ME: There are some differences. I think that in Portugal the game is a bit slower, but the players are better on the ball and think the game better. In North America the mentality of soccer usually goes more into an athletic kind of game. Players don’t think the game as much and I feel that the speed is always very high, even when it doesn’t have to be. At the end of the day it is all soccer. You just have to work hard and improve your game so you can look sharp in every kind of game you play.

FF: You played at Uniao de Leiria U20 squad and you won rookie of the year in that season. How would you rate their academy and development program in comparison to some of the better known academies in Portugal?
ME: I really enjoyed my time at Leiria. I wish the senior part of the club didn’t go through the financial difficulties that they did while I was there. It was a bad situation. The academy program was good for the conditions they had. We would train 4 times a week, using only half a field, while all the other teams in our league would have full fields just for them. Problems would appear during the season but with great unity and the will to do better, staff and players would look for solutions and put everything aside once we stepped on the field. Overall I think Leiria has a good academy program and they are able to compete with the big name teams in every age group. I just have to thank them for what they did for my brother and I, while we were there.

FF: Do you believe moving back to Portugal at the age of 11 was fundamental in your development as a soccer player, or would you have reached your goals had you stayed in Canada?
ME: I think it helped a lot. Soccer in Portugal is like a religion. Over 80% of the boys back home start to play soccer at a young age and that’s when the competition starts. This is fundamental for anybody that wants to make a career out of playing a sport. Soccer is considered a new sport in Canada and the USA. It only got serious in North America in 1996 which was when the professional MLS league was started. Now a day, I think soccer players around Canada have a better shot of making it big in the industry, because we now have 5 professional teams and when I started playing there were less teams and nobody had academies.

FF: You have played for Canada at the youth levels, how would you see a call up for Canada senior squad for a possible presence in the 2015 Gold Cup?
ME: I work on a daily basis to get better and help out my club. I am not going to lie; the National Team is also in my head. Playing for my country for the first time was my highest mark today. I have goals for my career and continuing to be called up to play for Canada’s team is one of them. I hope to be able to help out my country in every competition possible.

FF: Your parents were born in Nazare, you have lived in predominantly fishing communities, which one of your current team mates would make a great fisherman and why?
ME: Yes, Nazare is a big fishing community. If I had to pick one teammate to go fishing with me, I would probably be Richie Ryan. I am not sure if he is the fishing type of guy (ahaha), but me and him, already had a couple of situations where it was just the two of us and we managed to have a good time. Fishing is probably the only thing I can teach him (ahahah). He shares with me his soccer wisdom and I will give him some of my fishing wisdom. Sounds fair to me (ahahah).

We, at FootyFair, would like to thank Mauro Eustáquio for his time to participate in "10 Questions with a Pro". Until next time. 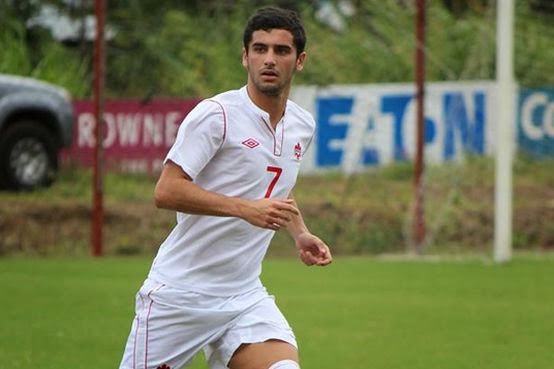