Ochoa Saves The Day For Mexico 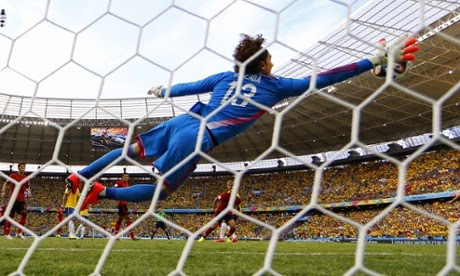 Not often in the World Cup do you have a goalkeeper stealing the show.
Normally we concentrate all of our attention on the strikers with their goals and hat tricks, midfielders with their wonderful amazing passes and the defenders with their timely tackles. The goalkeepers are often forgotten when discussing a game, unless they had a huge blunder that cost their team the match.

Yesterday we saw what perhaps will be remembered as one of the most dominant performances by a keeper, that we have seen in modern football and World Cup history. The performance of Guillermo Ochoa against Brazil yesterday was incredible, the stuff of legends. Lev Yashin would be proud of Ochoa.

He is the only reason Mexico has 4 points and is tied with Brazil on top of Group A. Going into this game everyone was expecting Neymar Jr to be the star and the storyline. Perhaps Oscar could steal the show and have another incredible performance or Dos Santos for Mexico; he can always turn a game on its head. These were all strong possibilities, but what nobody was expecting was for Guillermo Ochoa to be the star.

For a player that is currently without club he put on a show that for sure will have his agent’s phone ringing all day long. If you are looking at impressing a club, a performance like that at the biggest stage of the world will go a long way helping you secure a new contract.

It all started when Neymar Jr headed a ball towards the net and Ochoa with an incredible diving save, stops the ball right before it crosses the line. Immediately as the ball was saved commentators and Brazilian fans had flashbacks of the stop Gordon Banks did on a similar play during the 1970 World Cup. In that game Brazil’s Pele was denied in similar fashion by an incredible Banks, this time it was the “new Pele”, Neymar that was being denied. The similarities between both plays are evident, but the fact that both came from headers of Brazilian star strikers makes it even more incredible. At that point you knew that it would take something very special to beat Ochoa on this day.

He continued to rack up saves upon saves, not all of them of a high degree of difficulty but all of them of equal importance. He was keeping his team in the game and was able to shut down a powerful Brazilian offense. He was frustrating the Brazilian players that by this time were probably scratching their heads wondering what would take for them to score a goal.

Another player that would add his name to the list of frustrated Brazilians was Thiago Silva. In the 85th minute he is free in the box and has a powerful header that Ochoa is able to swat it away. An incredible reflex save that pretty much saved the game and the point for Mexico. That save was just another incredible save to add to the highlight package that Ochoa was putting together, it was his night and nothing or nobody was going to take it away from him. No surprise that he won the man of the match award, who else could have taken it?

For the person checking the score sheet after the game, the assumption would be that it was a boring match with no goals. For those that tuned in on TV or that had the pleasure of being in the stadium, it was an incredible entertaining match with a goalkeeper putting on a show that for many years will be remembered as one of the best performances by a goalkeeper in a World Cup tournament.
SHARE SHARE SHARE